Movie "Monstrum" Hyeri shed tears, "I put much effort in my first movie ever" 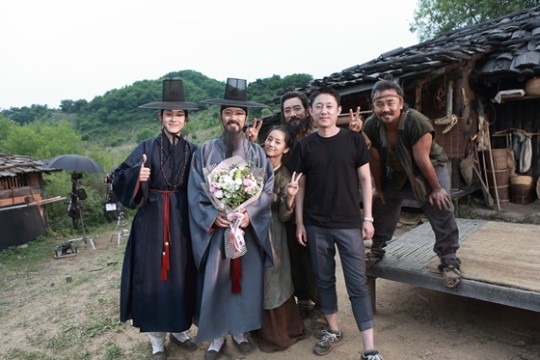 Movie "Monstrum" shot the last scene of the movie after 3 months of filming.

On the 27th, according to Kidarient Corp., the movie "Monstrum" finished up their shooting on the 21st in Yangpyeong County.

"Monstrum" is about a mysterious beast-like object appearing in Joseon era, threatening the country, and moreover, the King of Joseon. As the danger approach closely, Yoon-gyeom gets called to investigate this strange object and find a way to defeat it. The story of this strange object is actually recorded in the historical documents from the Joseon era, and the movie got its inspiration from this document.

Since the movie is a historical fiction, the cast and staffs traveled to several different mountains and outdoors of many regions. Even in the blazing summer heat, the crew cheered each others on and filmed the movie in harmony and laughter.

As the youngest and the life of the party, Hyeri kept on smiling and endured to the end. On the last day of the shooting, she finally let her tears drop, for the handwork they have all put in to this movie and in realization of the movie being over where she has to say good bye to everyone she's gotten so attached to in the past 3 months.

Actor Kim Myung-min commented, "Last 3 months, we fought hard against the strange object. This will be a legendary historical movie you've never experienced before, so, expect great things!" and actor Lee Kyung-young followed, "I'm so happy. I want to thank all the cast and the staffs for putting their hard work into this movie even in this summer heat".

Park Hee-soon shared, "We filmed diligently. It was a long time shooting, but I'm happy to see that everyone was safe and everything went well". Park Sung-woong also commented, "It was exhausting but it was such an honor to work with wonderful staffs and wonderful fellow actors".

As everyone shared their feelings of the shooting on the last day, Kim In-kwon shared, "It was draining but so worth it. I'll remember everyone, all the staffs and the actors whom I shared this wonderful experience with. I won't ever be able to forget my character, Seong-han.

Hyeri shared her feelings as well, "Finally the shooting of my very first movie has finished! I'm so excited to see the complete version of the movie and I hope it has a good outcome as much as we put a lot of effort into making a good movie".

Actor Choi Wooshik said, "It was so hot and exhausting filming this movie, but it was so much fun. I spent the last three months as my character, Propagandist Heo. I will feel empty hearted starting tomorrow without my character".

Lastly, Director Heo Jong-ho shared his remarks, "I'm so glad the shooting was safely done without any accidents or harms. I hope that the viewers will feel that "Monstrum" was made with our sweats and tremendous effort, and have the movie remembered as a good work".

"Movie "Monstrum" Hyeri shed tears, "I put much effort in my first movie ever""
by HanCinema is licensed under a Creative Commons Attribution-Share Alike 3.0 Unported License.
Based on a work from this source