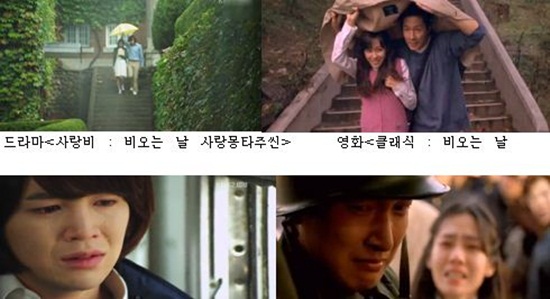 Production company Egg Films which produced the movie "The Classic" submitted an application of injunction for the prohibition of broadcasting or disposing of the drama "Love Rain", against production company Yoon's Color, the Korea Broadcasting System and KBS Media Corporation on the 31st last month.

A legal representative of Egg Films revealed, "Not only did the drama "Love Rain" infringement the copyright of the movie "The Classic" in terms of detailed summary, development of the story and mutual relationship between the characters in the story, the scenes that play an important role in expressing the characters internal emotions and lead the synopsis have been used without notice. Therefore, we have requested for a seizure of the drama for infringement matters with proof to the production and broadcasting company".

To the request of explanation for the action of infringement of copyright, the production's legal representative pointed out, "The summary that the man has to part with his lover for his friendship with his friend and the woman who misses him overlaps with their children's love in the future as they carry on the unfinished love of their parents first of all is similar to the movie. The overall spread out and structure of the drama as well as certain scenes have been repeated in this drama".

The legal representative continued, "The similar storyline, structure and scenes have just been replaced with characters and situations which are also very much alike and this can't be anything else but infringement of copyright".

Meanwhile, "Love Rain" is about to be an issue even in Japan as it's looking forward to airing in Japan as well.

"Movie "The Classic" production angers at "Love Rain""
by HanCinema is licensed under a Creative Commons Attribution-Share Alike 3.0 Unported License.
Based on a work from this source