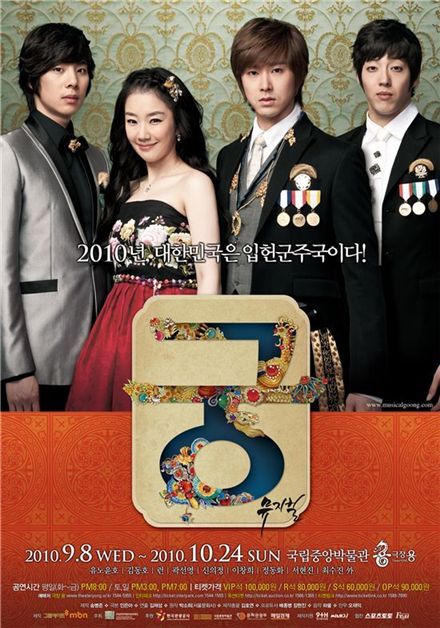 The musical adaptation of hit TV series "Princess Hours" will show overseas next year, according to the musical's producer Group 8 on Wednesday.

Park Rae-hyun, a PR official from Group 8 told 10Asia over the phone that producers will take the show to countries outside of Asia, starting with Japan, in January 2010.

He added that the company has yet to decide on the official dates and locations for its overseas run -- details for its showing throughout South Korea will be set first.

In Seoul, the musical will run at the National Museum of Korea from September 8 to October 24 and continue on into other provinces in the country until the end of the year.

Yunho Yunho, Kim Dong-ho-I and RUN will play the lead crown prince role of Lee Shin and actresses Gwak Sun-young and Shin Eui-jung will take over the role of the tomboyish Chae-kyeong.

"Goong", originally based on the best selling comic series of the same name, is about an average high-school girl marrying a royal prince in 21st century Korea, which is in fiction a monarchical country.

It was adapted for the small screen in 2006 and was a huge hit in the country recording viewership ratings in the high 30 percent mark and turning the two leads, Yoon Eun-hye and Ju Ji-hoon, into household names.

The drama "Princess Hours" was sold to 23 countries including China, Japan, Saudi Arabia, Taiwan and the United States, creating a Hallyu craze among the fans, particularly in Asia.