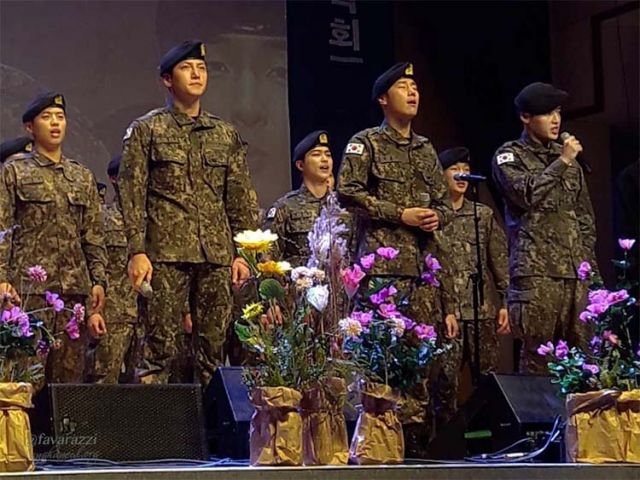 Enlisted soldiers Kang Ha-neul, Ji Chang-wook, and INFINITE's Sungkyu, together with the ensemble singers of musical Shinheung Military Academy, participated at the 2018 Arirang Hangil Concert that took place at 7:30 PM KST on Tuesday November 20, 2018 at Seoul National Cemetery. The musical's signature songs "Even If I Die, My Spirit Lives On" and "Finale" were performed by the all-male cast of the original Korean musical.

The event was part of the 100th anniversary celebration of the establishment of the Republic of Korea provisional government on March 1, 2019. The theme of the concert was "Arirang – A Song of Hope, A Song of Independence". Sponsored by the Ministry of Public Administration and Security, the Ministry of National Defence and the Seoul Metropolitan Government, the concert was open to the public on a first-come-first-served basis.

Meanwhile, musical Shinheung Military Academy, which tells about the lives of the Korean youth who lived during the early 1900s under Japanese occupation, is currently on its national tour in major cities in South Korea. Upcoming performances will take place in Daejeon (Nov 30-Dec 2); Busan (Dec 14-16); Ansan (Dec 21-23); Suwon (Dec 29-30) and finally in Daegu (Jan 4-6, 2019). Tickets are available in Interpark Korea.

"Musical Shinheung Military Academy at 2018 Arirang Hangil Concert"
by HanCinema is licensed under a Creative Commons Attribution-Share Alike 3.0 Unported License.
Based on a work from this source