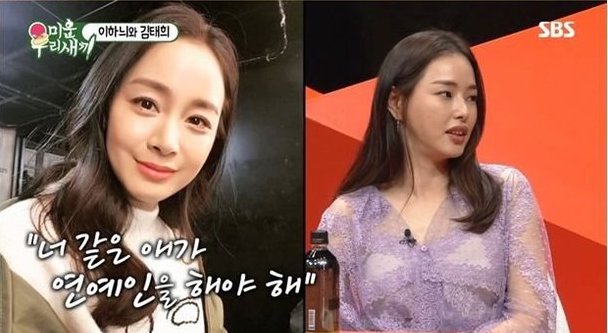 Actress Lee Hanee said she debuted because of Kim Tae-hee.

She appeared on the SBS TV show "My Ugly Duckling" on the 10th and she revealed her relationship with Kim Tae-hee that extends back to their Seoul National University days.

Lee Hanee said, "If it wasn't for Kim Tae-hee, it wouldn't have been easy to work in showbiz. We were in a ski group together and Kim Tae-hee said, "Girls like you should be celebrities"".

"The first audition I had was with a director and she set it up for me. She's like my savior".

When MC Shin Dong-yup asked who was more popular in university, Lee Hanee said, "I can't even compare. Kim Tae-hee was Jesus. People would swarm around her anywhere she went".

Shin Dong-yup told her about former S.E.S member and current actress Yoo Jin's popularity from what he heard from Sung Si-kyung. "Sung Si-kyung says he was there when she would enter a classroom and without staring, hundreds of student whispered her name".

Lee Hanee said, "When Kim Tae-hee went into class, the crowd divided into two to make a path for her. I stood around like a bodyguard. She was something else".

""My Ugly Duckling" Lee Hanee Attributes Her Debut to Kim Tae-hee"
by HanCinema is licensed under a Creative Commons Attribution-Share Alike 3.0 Unported License.
Based on a work from this source