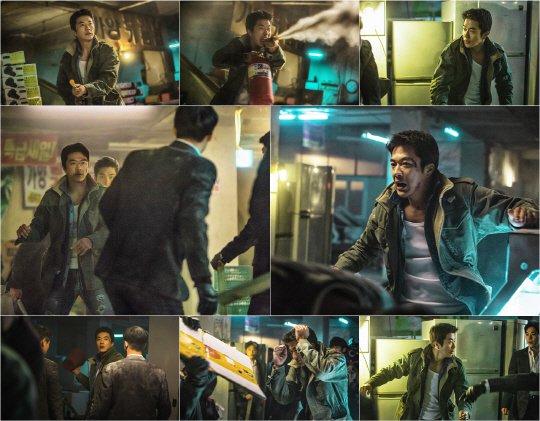 Kwon Sang-woo who is starring in the new KBS 2TV drama as Ha Wan-seung, an ace detective in narcotics, was seen throwing himself around in action.

Pictures show that he's putting it all out there as he sprays the fire extinguisher at his opponent, throws pots and using everything around him as weapons.

This kind of action scene has never been anticipated on ground-wave drama before.

Ha Wan-seung speaks more with his fists than his mouth or instincts. He also has a trauma which sets him away from crime.

Therefore, while he's fighting crime, he's also showing hostility to it for reasons that hurt him in the past.

For proper presentation, the movie crew and Kwon Sang-woo have been focusing more on rough and tough action instead of minor details.

Kwon Sang-woo has had experience with action in "Once Upon A Time In Highschool", "Running Wild", "Pained" and many more so it was no problem for him to put on the action moves. He also didn't need a stand-in and performed many high-level action on his own.

Even after a long take, he'd just get up and be ready for another round.

""Mystery Queen" Kwon Sang-woo's rough action "
by HanCinema is licensed under a Creative Commons Attribution-Share Alike 3.0 Unported License.
Based on a work from this source