New calendars printed by the North Korean regime show young people in 1980s-style clothes singing as they are gathered around a picture depicting former North Korean leader Kim Jong-il. The caption claims they are young South Korean students who are reminiscing about the late leader.

If South Koreans have appeared in North Korean calendars in the past, they were either politicians such as former presidents Kim Dae-jung and Roh Moo-hyun or other famous people. The calendars for next year feature ordinary South Koreans for the first time. 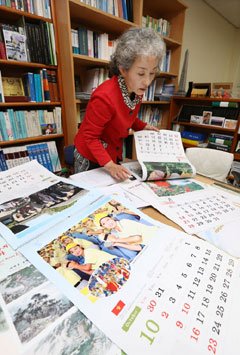 "This is an attempt at showing the softer side of the Kim Jong-un regime", said former lawmaker Park Sun-young, who heads a group called Dream Makers for North Korea. "Rather than depict politicians or other influential figures, the North is attempting to show that South Korean citizens also support the regime".

Park said the calendars reflect changes in North Korean society. All calendars have common slogans lauding the Kim dynasty. But they no longer refer to them as "Comrades" but "leaders".

"There is still a considerable personality cult surrounding Kim Il-sung, but there's less respect for Kim Jong-il and many think Kim Jong-un is too young and inexperienced", Park said.

"N.Korean Calendars Show Cuddly Side of Totalitarianism"
by HanCinema is licensed under a Creative Commons Attribution-Share Alike 3.0 Unported License.
Based on a work from this source