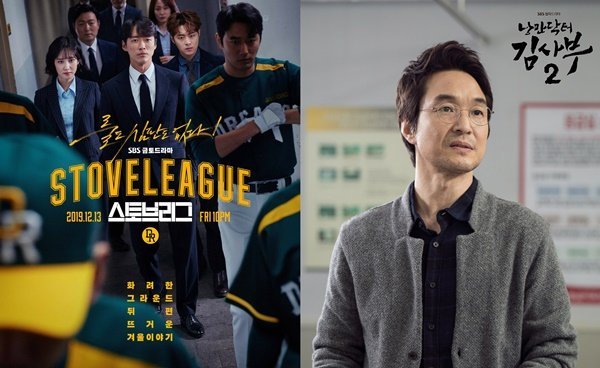 Will Namgoong Min and Han Suk-kyu re-open the gates to SBS dramas?

Two dramas are lined up in SBS for the end of the year; "Stove League" every Friday and Saturday and "Dr. Romantic 2" every Monday and Tuesday.

"Stove League" and "Dr. Romantic 2" can be looked forward to just for the fact that they have been chosen by Namgoong Min and Han Suk-kyu. They have incredible insight in choosing their dramas and amazing character assimilation powers. Namgoong Min is reputable for his success in several dramas such as "Remember", "Chief Kim", "Falsify" and "Doctor Prisoner".

Han Suk-kyu's appearance alone gives a drama a great sense of existence and securely holds the story from the center. When "Dr. Romantic" first became successful, the storyline was so good, fans were already anticipating a second season even before the first season was over.

- The leader we've all been waiting for

"Stove League" and "Dr. Romantic 2" are going to show us value. "Stove League", which is the Korean version of "Moneyball", is a straightforward office drama about a new captain of a losing baseball team preparing for the best season of the year. Baek Seung-soo (Namgoong Min) is going to show 'the leadership we've been waiting for', breaking through the wrong systems, the injustice, and bad habits of the organization. In this process, it provides deep insights and warmth to those in the real world who are fed up with the unfair structures of society.

"Dr. Romantic 2" is the 'real story of doctors' against the backdrop of the miserable Doldam Hospital. A 'hardworking genius' who rethinks life and a 'surgical genius' who doesn't believe in happiness learn real romanticism through 'oddball genius doctor' Teacher Kim, who once used to be called 'God's hands'.

With Han Suk-kyu in the center, Jin Kyung, Im Won-hee, Byun Woo-min and Kim Min-jae-I from the first season reunite, while Ahn Hyo-seop, Lee Sung-kyung and So Joo-yeon newly join the cast. In season 2, we see the growth of Seo Woo-jin (Ahn Hyo-seop) and Cha Eun-chae (Lee Sung-kyung) when they meet Teacher Kim (Han Suk-kyu) and provide comfort and romanticism as characters relatable to 'growing-ups', meaning young adults.

"Namgoong Min and Han Suk-kyu Take Over SBS Dramas"
by HanCinema is licensed under a Creative Commons Attribution-Share Alike 3.0 Unported License.
Based on a work from this source