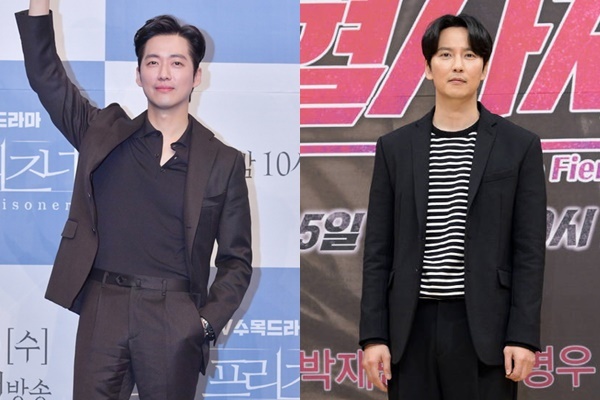 While the Burning Sun scandal causes havoc, dramas are relieving some of the frustration with blows to criminals and wrong-doers.

Namgoong Min and Kim Nam-gil are a couple of examples. These two are currently starring in the KBS 2TV drama "Doctor Prisoner" and SBS TV "The Fiery Priest".

Namgoong Min plays a doctor who doesn't cure illnesses, but creates them. "Doctor Prisoner" is the story of a genius surgeon who was ejected from a university hospital, becoming the medical section chief head of a prison. Na Yi-je's ill-fate with Taekang Group's son Lee Jae-hwan (Park Eun-suk) deprives him of his medical license and he spends 3 years in prison. He is the victim of a third generation chaebols display of power, but he will get along with anyone for his goal.

In the 2017 KBS 2TV drama "Chief Kim", Namgoong Min caused a syndrome in the role of Kim Seong-ryong who defended himself from the power display of major companies, but this time he stands against evil with evil. He appears even striking and hypocritical.

The second episode of "Doctor Prisoner" leaped over 14% and is currently in the lead of other Wednesday / Thursday dramas. The realistic storyline is also one key to its success. Dressing richly in external hospitals served as a reminder to the contract murder of a company chairman's wife in 2002. Lee Jae-hwan was sentences to 3 years imprisonment for the use of drugs, but he used him powers to get himself out without feeling the least bit of remorse and using his authority anywhere made the viewers burn with anger.

Namgoong Min plans on threatening Seon Min-sik's (Kim Byung-chul) position and uncertain all sorts of corrupted activity in his own way. Writer Park Gye-ok said, "I expect a new kind of catharsis by defeating evil with evil. Na Yi-je will achieve his goals by being even worse than the bad guys".

Kim Nam-gil turned into a funny priest. "The Fiery Priest" is about Kim Hae-il (Kim Nam-gil), a priest with anger management who used to be a spy and detective Goo Dae-young (Kim Sung-kyun) who work on a murder together. Kim Nam-gil didn't imitate the characters he played in the 2015 movie "The Black Priests", the 2018 drama "The Hand" and the 2018~2019 drama "Priest". "The Fiery Priest" is quite depressing with social and political issues but Kim Nam-gil enlightens all that with his comical act and political satire.

Rising Moon calls up the Burning Sun issue in which Big Bang's Seungri used to be involved. Rising Moon was where celebrities and the rich circulated drugs and committed crime. Every time narcotics raided the club, it was too clean and raised suspicion of an inside person being involved. The news from reality is being blended into the drama and as a result, it is running high with a viewing percentage of over 18%.

A source from the production says, "The characters in "Doctor Prisoner" and "The Fiery Priest" are not about the good defeating the evil. They are dark heroes who will do anything for justice. Not all dramas are successful because they deal with realistic facts. The SBS drama "Big Issue" is all about recent issues like profopol injection, sexual harassment of female celebrities and failure to deliver military obligations by a top actor but the viewing rate is as low as 3 to 4%. Screenplay, production and performance have to be in accordance".

"Namgoong Min and Kim Nam-gil Provide Relief in a Time of Scandal"
by HanCinema is licensed under a Creative Commons Attribution-Share Alike 3.0 Unported License.
Based on a work from this source