MBC-TV's new drama "The Veil" unveiled the script reading site on the 10th. The cast and production crew, including Namgoong Min, Park Ha-sun, and Kim Ji-eun-IV, gathered together.

"The Veil" is a Korean spy investigation. The story takes place when a top NIS field agent, who went missing a year ago, returns to the organization to find an internal traitor who dropped him into the abyss. 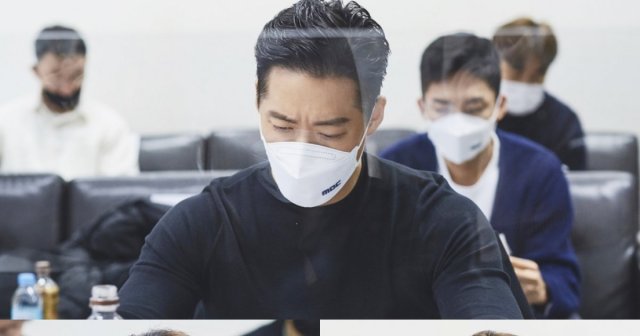 First of all, Namgoong Min has transformed himself into Han Ji-hyeok, the best field agent of the NIS' overseas intelligence bureau. On this day, he showed off his heavy charisma with a single line, proving the potential of Korea's leading actor.

Park Ha-sun plays Seo Soo-yeon, the team leader of the Center for Information Integration. She's an elite agent with a secret. She showed off her lovely unexpected charm and at the same time, showed off her cool side with her charming eyes. Kim Ji-eun-IV plays Han Ji-hyeok's partner, Yoo Jae-yi. She is also a promising field agent within the NIS. Her brave, confident and beautiful smile made the reading scene a pleasant atmosphere.

On this day, director Kim Sung-yong expressed his special affection, saying, "I want this to be a site where when I wake up in the morning, I want to go to the scene quickly and I want to be with you even though the shooting is over".

Writer Park Seok-ho said, "I often feel discouraged because writing is done alone", and added, "I got strength from hearing that you are with me every now and then".

Lastly, Namgoong Min expressed his reasonable confidence, saying, "I had a clear feeling that our drama would do so well because I was with good actors".

Meanwhile, "The Veil" is the winner of the 2018 MBC Drama Screenplay Contest by Park Seok-ho. Director Kim Sung-yong of "The Flower in Prison" and "My Healing Love" directed it. It is scheduled to air in the second half of this year.