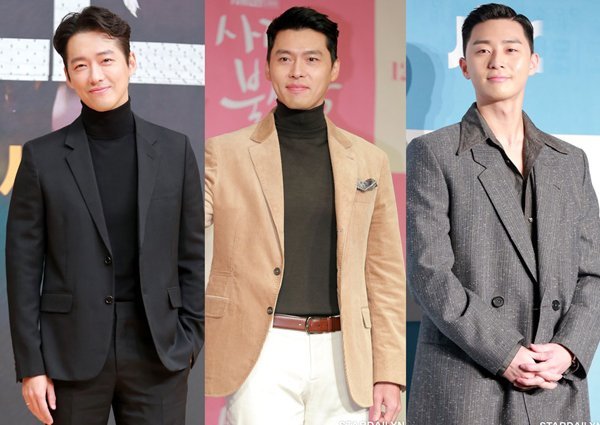 Weekend nights are anticipated for the performances of masters of acting.

Namgoong Min with one more episode to go in "Stove League", Hyun Bin, who is climbing to the top with "Crash Landing on You", and Park Seo-joon, who is the latest addition to the weekend with "Itaewon Class".

They have each attracted men and women fans with different appeals and make the weekend very much looked forward to.

Namgoong Min is showing a whole new level of sympathy in "Stove League".

He doesn't reveal his innermost feelings to anyone, but every single word he says is so relatable that it makes viewers, regardless of gender or age, nod their heads in approval.

Like the office drama that it is, every word Namgoong Min says becomes 'a classic line like Holy Water' to members of society.

As coach Baek Seung-soo, Namgoong Min uses facts as his weapon and presents catharsis to people by restoring the order in Dreams, a failing baseball team.

Namgoong Min's character is spreading like a trend and he's living through the peak of his career that proves his reputation as an actor of 20 years. Baek Seung-soo is a 'role model leader' that anyone would want to meet in this generation.

"Crash Landing on You" has re-earned him the title 'rom-com king'. He's so good that it's impossible to tell if his feelings for his co-star, Son Ye-jin, are real or just an act.

"Crash Landing on You" has brought on an issue every week and is skyrocketing in viewership.

Hyun Bin takes on the role of a North Korean officer who is good looking and is good at what he does, but is so innocent and adorable when it comes to love. He's so good at it that people call it the 'Hyun Bin genre'.

Despite the drama being an unrealistic story, Hyun Bin's performance brings to life the character of a man who doesn't exist in real life.

Park Seo-joon works well with just about anyone. In fact, he gets along amazingly with other men actors in the cast.

As this is based on a webtoon of the same name, "Itaewon Class", fans wonder what the ending would be like; if it would follow the ending of the original webtoon.

Park Seo-joon synchronizes perfectly with the character Park Sae-roy and Son Hyun-joo in his father's role.

"Itaewon Class" has drawn viewers with its immersion and Park Seo-joon's cathartic performance, which is based on his values.

"Namgoong Min, Park Seo-joon and Hyun Bin, Masters of the Weekend"
by HanCinema is licensed under a Creative Commons Attribution-Share Alike 3.0 Unported License.
Based on a work from this source