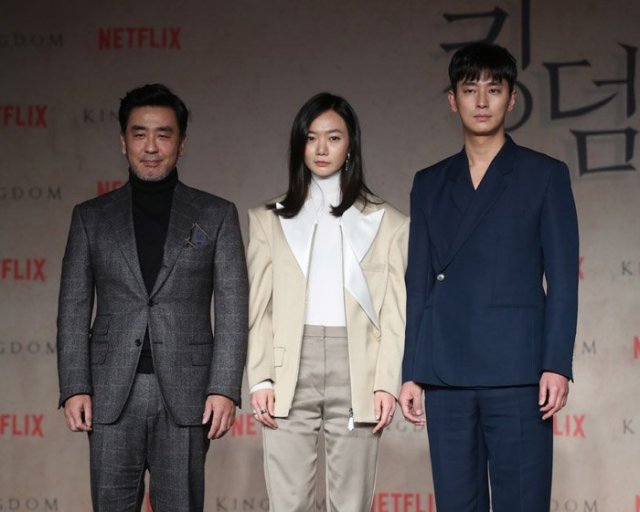 The first Korean drama series produced by Netflix is due to be released around the world this week. A press event for the series was held in Seoul on Monday before it goes to air on Friday for 139 million subscribers in 190 countries.

Set during the Chosun Dynasty, the six-episode zombie drama revolves around a doomed crown prince who investigates a mysterious epidemic. The series stars Bae Doona, Ju Ji-hoon and Ryu Seung-ryong. It is directed by Kim Seong-hun, who directed the 2016 film "Tunnel", and written by Kim Eun-hee-I, who scripted the hit TV series "Signal".

Netflix has been increasingly involved in Korean entertainment productions to expand its presence in Asia, where Korean films and TV series and shows are popular. It made a huge investment in director Bong Joon-ho's 2016 film "Okja", and produced the first entertainment show "Busted! I Know Who You Are" last year. It also cooperated with leading management agency YG Entertainment to air a YG-produced sitcom starring Seung-ri of boy band Big Bang.

With "Kingdom", its aim seems to be to lure more Western viewers by incorporating a zombie theme familiar to them.

The cast said they were excited to be starring in a series airing on the world's leading streaming service.

"We are all actually new faces [to global Netflix viewers] except for Bae Doona, who is already recognized for her roles in Netflix's TV series", like "Sense 8", Joo said. "I'm really excited that viewers across the world will watch it".

"Making a six-episode drama was new for me, as I had only worked on two-hour film projects. I tried to keep in mind how people from different cultures would respond to it", the director said.

"Netflix Unveils Korean Zombie Series"
by HanCinema is licensed under a Creative Commons Attribution-Share Alike 3.0 Unported License.
Based on a work from this source