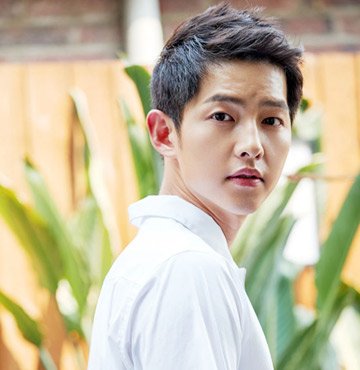 Actor Song Joong-ki in an interview with the Chosun Ilbo on Monday said he jumped at the chance to work on "The Battleship Island", which hit theaters on Wednesday.

"I received the script for the film when I was off work recovering from an injury I sustained while shooting 'Descendants of the Sun' last year. As soon as I read it, I had a hunch that this is something I should do, and I got straight on the phone to director Ryoo Seung-wan", Song said, adding that he tends to go with his hunches when choosing projects.

Song plays an independence fighter who infiltrates Japan's Hashima Island, where Koreans were taken to work in mines as slave laborers during Japanese colonial rule. His character is a good soldier, expert marksman and natural leader.

"Some people thought it was a bad idea to accept a supporting role. But that didn't worry me", Song said.

Studying the history of Hashima Island led Song to reflect on his responsibilities to society. In October last year he donated W20 million to help surviving women who were forced to serve as sex slaves for Japanese troops during World War II (US$1=W1,115).

Last year, Song's fiancée Song Hye-kyo made headlines after she refused an offer of modeling work from Mitsubishi Motors due to its involvement in Japanese atrocities during the war.

The couple made a surprise wedding announcement early this month. They had repeatedly denied rumors that they were romantically involved after working together on the megahit TV series "Descendants of the Sun".

Told that the two seemed meant for each other, the actor said, "I think so, too. She's more than just a pretty face. I've learned a lot from her. Our relationship has only gotten stronger and I'm looking forward to our future together".

The two will tie the knot on Oct. 31. "When I told my father about my wedding plans, he was happy, saying the most beautiful woman in Asia is going to become a member of the family", Song said with a laugh.

"New Film Project Brings History Alive for Actor Song Joong-ki"
by HanCinema is licensed under a Creative Commons Attribution-Share Alike 3.0 Unported License.
Based on a work from this source