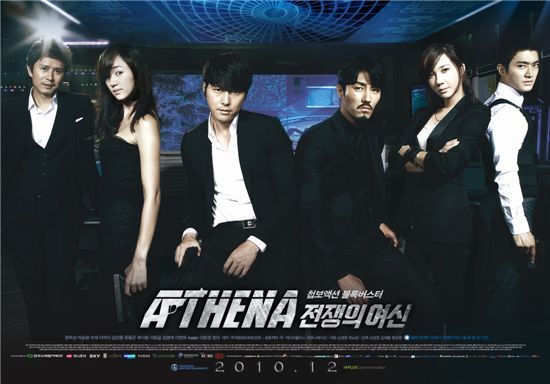 New SBS series "ATHENA" which premiered this week, took off to a flying start, ranking first place amongst dramas in the Mondays and Tuesdays prime time slot.

"ATHENA", a spy action-thriller scored an average viewership rating of 26.5 percent this week, according to Total National Media Statistics (TNmS) and 21.9 percent on a survey by AGB Nielson Media Research.

The first episode of "ATHENA" opened with a large-scale clash between South Korean agents and a mysterious spy duo struggling to get hold of a North Korean scientist who developed a high speed nuclear reactor and expressed his wish to flee to South Korea.

The show then went onto introducing the headquarters for the National Anti-Terror Service (NTS), the intelligence agency where the main characters will serve their missions.

MBC's "Queen of Reversals", the steady second-runner of Mondays and Tuesdays shows, showed notable improvement in terms of rating, marking an mean score of 12.3 percent on TNmS' chart and 14.5 percent on AGB's poll, gaining by nearly three and five percent, respectively, from last week.

The drama starring Kim Nam-joo, Jung Joon-ho, Park Si-hoo and Chae Jung-an depicts on the joy, sorrow and struggles in the workplace through business projects, lay-offs and rivalry.

"New SBS drama "Athena" leads prime time chart on 1st week "
by HanCinema is licensed under a Creative Commons Attribution-Share Alike 3.0 Unported License.
Based on a work from this source