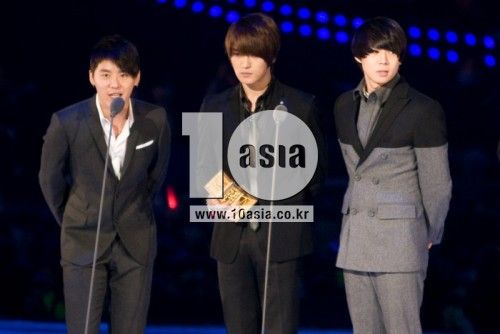 Korean pop idols Kim Jae-joong, Park Yoo-chun and Xiah Junsu, three members of boy band TVXQ who formed a new unit since getting involved in a legal battle with agency SM Entertainment, gave a sold-out concert in Japan over the weekend.

According to a report by Japanese newspaper Sankei Sports, the trio performed their last show of their two-city, four-gig concert tour in the country in front of some 54,000 fans who showed up Sunday at Tokyo Dome. The four shows reportedly attracted a total of 200,000 fans.

During the concert, whose setlist was comprised of a total of eighteen songs, the three singers broke into tears while performing their new track "W".

"I want to keep on singing with a pure heart. Thank you forever", Kim Jae-joong was quoted as saying at the show.

Bandmate Park Yoo-chun thanked fans saying, "We were very worried if we could perform on stage again. We were able to get here because of you".

Last July, the three singers had asked a court to nullify their 13-year exclusive contract with SM, claiming that the contract period is too long.

The legal dispute led to the mega-successful boy band halting their activities as a five-member group, who officially quit working as a group in Korea last year and later in Japan as well.

Arguably the most phenomenal K-pop act created by talent agency SM Entertainment, the TVXQ had enjoyed great success throughout Asia and the Japanese music industry in particular.

Although the group's legal woes did little to wane their popularity among fans, the five members have been going their separated ways with Kim Jae-joong, Park Yoo-chun and Xiah forming a new group through which they will continue their music careers.

The trio are set to release a documentary DVD on July 28 and appear at music festival "a - nation'10" to be held in Osaka and Tokyo starting August 7.

"New TVXQ trio unit gives concert in Japan "
by HanCinema is licensed under a Creative Commons Attribution-Share Alike 3.0 Unported License.
Based on a work from this source