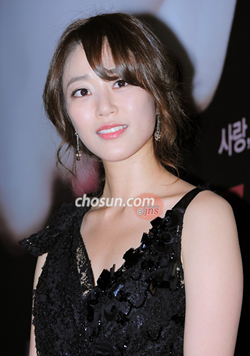 Actress Kim Hyo-jin, who has fallen under the spotlight since she married fellow actor Yoo Ji-tae last week, returns to the silver screen after a long absence with a daring new role.

Kim plays the lead role of a lesbian dealing with the challenges of a same-sex relationship in Korea in the movie "Life is Peachy", which was released here on Thursday.

In the film, Kim and her co-star Kim Kkobbi get to test audience sensitivity to their depiction of a romantically involved couple. The two actresses kiss in some scenes and also appear in sex scenes that involve a degree of nudity.

"We were comfortable about doing this because we were already good friends. I didn't feel that a gay romance was that different or weird", said Kim Hyo-jin. "The love in the film was between two people who just happened to both be women".

Kim Kkobbi added, "Because it was about same-sex love, we watched foreign films and TV series on this topic. But when the cameras started rolling, I think we just followed our own feelings and style".

"Life is Peachy" was officially invited to the Panorama section at the 61st Berlin International Film Festival in early February this year.