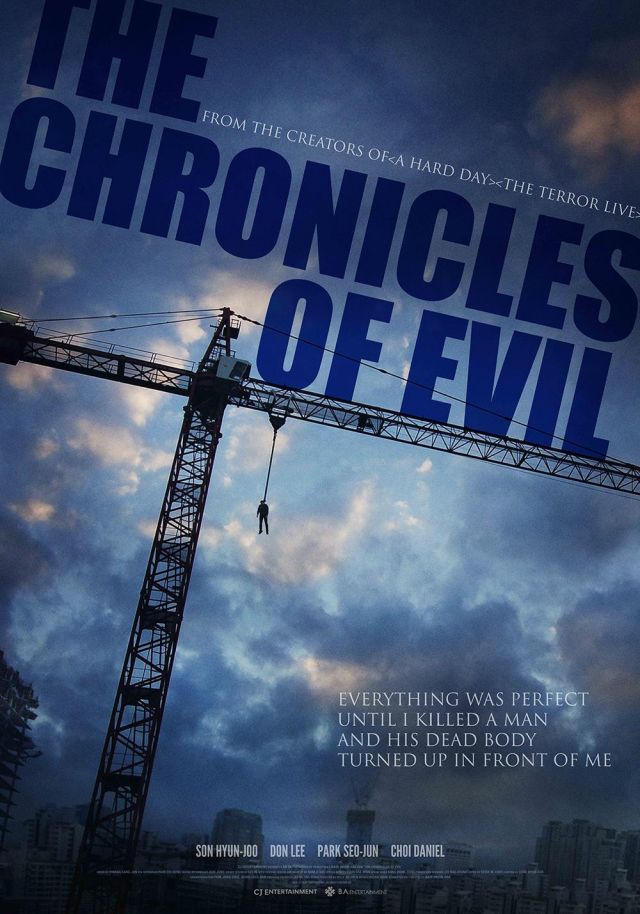 Action-thriller "Chronicles of Evil", distributed by CJ Entertainment and produced by BA Entertainment, premieres in North American theaters on May 22, 2015 on the heels of the film's release in South Korea. Directed by Baek Woon-hak, the writer of Korea's first big-budget blockbuster "Shiri", "Chronicles of Evil" is the gripping tale of a chief detective who is tasked to solve a murder that he committed in self-defense. The talented cast includes Son Hyun-joo ("THE CHASER - Drama", "Three Days"), Ma Dong-seok ("The Good, the Bad, the Weird", "The Unjust"), Choi Daniel ("High Kick Through The Roof", "Cyrano Agency"), and Park Seo-joon ("A Witch's Romance").

On his way home after a night of celebration, Chief Detective Choi is attacked by an assailant, who he kills in self-defense. Confronted with losing his chance to ascend to the highest echelons of the police force, Choi covers up all traces of the crime. But when the body shockingly appears hanging from a crane the next day, he is tasked with solving the very murder he committed. With his own squad hot on his trail, how will he escape slipping further down into the hell of escalating lies and corruption?

"Chronicles of Evil" Director Baek Moon-hak: The Mind behind "Shiri"

"Shiri", Korea's breakout hit of 1999 was also the nascent Korean film industry's first major blockbuster film. Starring a pre- "Old Boy" Choi Min-shik and written by "Chronicles of Evil"'s Baek Moon-hak, the film was praised for its heart-stopping pace and Hong Kong action film styling. Beyond those visual elements, what stood out was a script that was tight, full of meaningful twists, which also encapsulated one of greatest issues in Korean history--the reunification of North and South Korea. The script elevated the material beyond "just another action film", ending on a thought-provoking note that was almost scandalous for its time.

"Chronicles of Evil" Director Baek Moon-hak: The Mind behind "Shiri", Korea's breakout hit of 1999 was also the nascent Korean film industry's first major blockbuster film. Starring a pre- "Old Boy" Choi Min-shik and written by "Chronicles of Evil"'s Baek Moon-hak, the film was praised for its heart-stopping pace and Hong Kong action film styling. Beyond those visual elements, what stood out was a script that was tight, full of meaningful twists, which also encapsulated one of greatest issues in Korean history--the reunification of North and South Korea. The script elevated the material beyond "just another action film", ending on a thought-provoking note that was almost scandalous for its time.

This ability to bring deeper meaning to thriller material is showcased in "Chronicles of Evil", which Baek Moon-hak both wrote and directed. At its heart, the film addresses how humans are defined by their actions, not in everyday life, but when presented with situations seemingly out of the realm of possibility. In that vein, the central character, Chief Detective Choi, generally a "good person" makes the understandable but wrong choice of covering up his crime when he kills his assailant in self-defense. From that one choice, begins a descent into the hell of lies and guilt, which is brought to life by Baek's dark, gritty visual imagery and Son Hyun-joo's turn as Detective Choi, a man who is defeated by his own grave error.

Baek Moon-hak's "Chronicles of Evil" is a film, on the strength of its gripping script and dark atmospheric imagery, that is a must see for fans of Korean Action/Thriller cinema.

Chief Detective Choi // Son Hyun-joo
Chief Detective Choi is en route to becoming one of the nation's most powerful police officers--if only he can "stay under the radar" until the promotion. For the seemingly righteous Choi, that only seems like a matter of formality until he kills an unknown assailant in self defense. Caught in a web of exponentially growing lies to cover his crime, Choi's character shows how dark a man can go when confronted with losing everything.

Son Hyun-joo
Son Hyun-joo has made a name for himself as a character actor in the booming Korean Drama industry with roles in political thrillers like 2012's "THE CHASER - Drama", 2014's "Three Days", and 2013's "Empire of Gold". He has also gone on to establish himself as an in demand film actor for psychological thrillers with his role in 2013's "Hide and Seek". As Chief Detective Choi, he shows the weight and mental tumult of a good man driven to darkness by a single mistake.

Detective Oh // Ma Dong-seok
The precinct's hardest working detective, Detective Oh is unfailingly loyal to his chief. But, when he witnesses Choi commit a shocking act will he be able to reconcile his loyalty with his conscience?

Ma Dong-seok
A former Mixed Martial Artist and trainer, Ma Dong-seok didn't take the traditional route to stardom. But with his considerable strength he has crafted a niche in Korean cinema, starring in over 34 films under the Action/Thriller banner, including: 2008's "The Good, the Bad, the Weird" and 2010's "The Unjust". In "Chronicles of Evil", he is the Beating Heart of a precinct that is rotting from corruption.

Kim Jin-kyu // Choi Daniel
An actor ruined by a scandalous drug addiction admits to murdering multiple police officers--but is it true or his most celebrated role yet?

Choi Daniel
Choi Daniel became a star on Korean television with his role in the 2009 family comedy High Kick Through The Roof and rose to fame on the silver screen with the 2010's surprise hit, "Cyrano Agency". Playing an actor in "Chronicles of Evil", Choi gives a layered performance as a man forced into a fatal game by drug addiction and love.

Cha Dong-jae // Park Seo-joon
The newest recruit in Chief Detective Choi's homicide division, Dong-jae frequently finds himself empathizing with criminals to his leader's ire. But, when he finds Choi's tie pin near their latest murder victim, his faith in his mentor begins to shatter. But, is the innocent Dong-jae all that he seems?

Park Seo-joon
A recent debut in the world Korean film and television, Park Seo-joon rose to fame on charisma alone with his turn in 2014's "A Witch's Romance". As Cha Dong-jae, he imbues the tortured on the inside, innocent on the outside, Dong-jae with his considerable charisma and understated presence.

The Man Behind the Blockbuster: Baek Woon-hak

Baek Woon-hak is best known as the writer of 1999's "Shiri", which was the first big-budget blockbuster to come out of Korea. The film, which was the highest grossing film of 1999 and remains one of highest grossing films of all-time in Korea, resonated with the public not only because of its heart-pounding suspense, but its plot which centered on the issue of North Korea-South Korea reunification. But, "Shiri" is not the only celebrated film under Baek's belt.

Baek would go on to write and direct his own political thriller, 2003's "Tube", which starred the celebrated Korean actress, Bae Doona. The film, about a subway officer and a pickpocket who must make a choice to sacrifice themselves to save subway riders from a terrorist attack, was praised for its high stakes plot and wild action sequences. Baek Woon-hak's heartstopping and heart-wrenching plot drew comparisons to Speed and Die Hard from many critics.

"Chronicles of Evil" combines "Tube"'s suspenseful script with a contemplative, dark atmosphere more akin to psychological thrillers. Beyond suspense and mind-bending twists, Baek's film is the chronicle of one man's descent into the depths of darkness. As the film pushes on, with each chance to make the "right choice", Chief Detective Choi chooses the easy path of self interest, plunging deeper into a hell of his own making and disappointing those around him. But, when he receives a final chance to take responsibility, will he make the right choice or the easy choice?