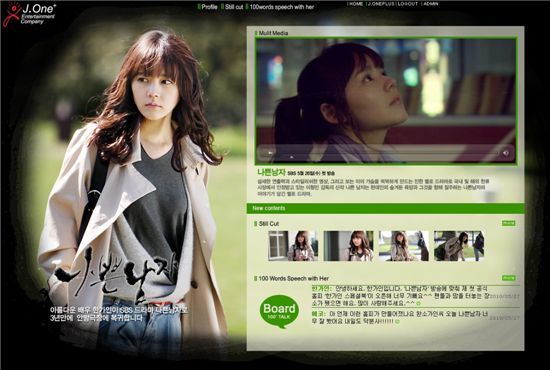 The official website for Korean actress Han Ga-in opened today, according to her agency J. One Entertainment on Thursday.

J. One announced in a press release that they have created the "Han Ga-in Special Book", (http://www.joneplus.com/hangain) the actress' first official website since her debut.

The trailer to Han's new TV series "Bad Man" is currently posted on the main page of the website and her profile, up-to-date news, still cuts from the series and a 100-word message board for Han and fans are the basic features of the site.

A representative from the content development team at J.One explained, "Han has returned to the small screen and she wanted a way to stay close to her fans so we opened the 'Han Ga-in Special Book'. We will work hard to support her and this website".

"I am really excited about this website. Until now, I've only had sites operated by my fans and this is the first time ever to have an official webpage with my name on it. I hope that with the special book I can become closer to my fans and keep them updated on my life", Han was quoted saying.

Regarding her latest series airing on Wednesday and Thursday nights, the actress said, "Hopefully it [role in "Bad Man"] will break the former images [fans have of me] from my commercials. I am working hard and hopefully the audience will enjoy it".

Han, 28, made her debut in 2001 through KBS' drama "Sunshine Hunting". She has starred in several other series including "Yellow Handkerchief" and "Super Rookie". She married fellow actor Yeon Jung-hoon in 2005.

Han is currently playing the role of Moon Jae-in in her latest drama "Bad Man" alongside actor Kim Nam-gil as Shim Gun-wook.

Shim and Moon are characters who dream of climbing the social ladder by wooing the children of a conglomerate family but end up falling in love with each other.

The show began its run on SBS' primetime slot last night, taking off to a moderate start with viewership ratings of 12 percent on TNmS' poll and 11.7 percent on AGB Nielsen Media's survey. 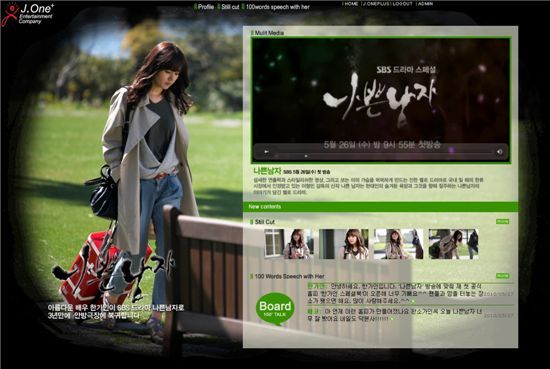 "Official Han Ga-in website open today"
by HanCinema is licensed under a Creative Commons Attribution-Share Alike 3.0 Unported License.
Based on a work from this source