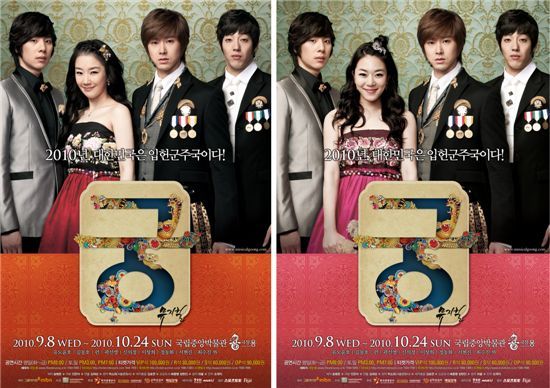 The poster shows actors (from left) RUN, Yunho Yunho and Kim Dong-ho-I, who will play the leading role of crown prince Lee Shin, with actress Gwak Sun-young in one version of the poster and Shin Eui-jung in the other version for the role of the tomboyish Chae-kyeong.

"Goong" is a story about an average high-school girl marrying a royal prince in 21st century Korea, which is in fiction a monarchical country.

Originally based on a best-selling comic series, "Goong" ("Princess Hours") was adapted for the small screen in 2006 which also became a huge hit and turned its two lead actors, Yoon Eun-hye and Ju Ji-hoon, into household names.

Ticket for the musical will go on sale on Thursday and premiere on September 8 at the National Museum of Korea.