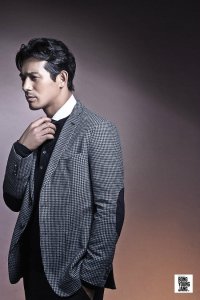 Oh Ji-ho left Taiwan joyfully yesterday upon the completion of his promotional tour for the Korean drama series 'Fantasy Couple'. During his 2 night 3 day tour, he had the opportunity to try various Taiwanese delicacies and played baseball on a machine at the night market. Also, following in the footsteps of his character of the drama series, he visited several kindergartens in the Taipei District. Due to his tight schedule, he had to travel back and forth under the hot Taiwan sun, yet instead of grumbling, he was very cheerful throughout his tour. He showed a high level of enthusiasm regardless of whether he was eating, playing, or visiting the children. As one would say, 'He didn't act like a star at all'.

Despite of his height of 6 feet, weighing 173 pounds, he didn't look rough in person at all. Instead, he exuded an aura of nerdiness. Oh Ji-ho stated that he is an introvert. He also admitted that he is actually a nerd. As for his role in 'Fantasy Couple', as a handyman, he had purposely changed his hair and tanned himself to portray a more manly image. Oh Ji-ho jokingly said that the 2 days of Taiwanese sunshine is driving him insane as he no longer needs a tan. He also said, "Just by walking under the sun for several minutes, everyone would sweat an incredible amount".

Regarding his new image after starring in the romantic comedy 'Fantastic Couple', Oh Ji-ho claimed that his role in the drama series had helped him to master the skill of being humorous, so much so that not only his audience, but his friends and families are shocked as well. Who would have expected a boring nerd to turn out to be quite a natural when it comes to humor?

Due to his outstanding performance, Oh Ji-ho won the Popularity Award last year. It is rather obvious that his popularity is soaring. Oh Ji-ho, together with the "Fantastic Couple"'s heroine, Han Ye-seul beat the Yoon Eun-hye and Ju Ji-hoon couple from "Princess Hours" to win the Best Couple Award. Regarding his victory, Oh Ji-ho said, "Now I know how popular an actor from a romantic comedy can be".