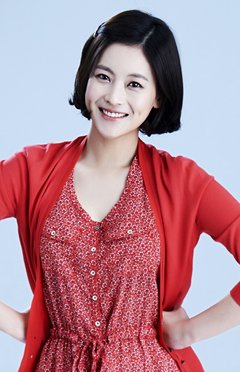 Actress Oh Yeon-seo is enjoying the sweetest moment since her debut in show business about a decade ago with the success of MBC weekend drama "Jang Bo-ri Is Here!", in which she plays a starring role.

It was big challenge for Oh to portray a young woman speaking a distinctive local dialect from Jeolla Province in southwest Korea, especially when she was born and raised in South Gyeongsang Province, which has a totally different dialect.

During a press event in April before the drama aired, Oh discussed the pressure she felt about speaking the local dialect. But she worked hard to master it, even getting private tutoring.

Her debut came in 2002 as a member of girl group after she was spotted in an audition that she went to for fun.

"I thought to myself, if I don't become something after 10 years, I will quit", Oh said. And in exactly the 10th year of her professional career, she became an overnight sensation through a supporting role in the KBS drama "My Husband Got a Family".

She then strived hard to continue the momentum, but with little success. She got to star in several soaps, but they all failed to impress viewers.

"It was a tough time, but 'Jang Bo-ri Is Here!' helped me take a step in the right direction", she said. "I think I've grown after experiencing both success and failure".

Oh cries a lot in the drama as her character Jang Bo-ri endures a life full of ups and downs. She lost three to four kilograms and suffered from vocal fold nodules from crying so much.

"I'm not particularly good in crying scenes, but I think I cried in almost every episode", Oh said. "It's tiring, but I'm happy I can show that I can do anything".

The drama is wrapping up soon. The schedule is tight and rigorous, but Oh feels energized from the support the series has received.

"Next time, I want to do a character who speaks my hometown dialect. That's my specialty!" said Oh.

"Oh Yeon-seo Basks in TV Drama's Success"
by HanCinema is licensed under a Creative Commons Attribution-Share Alike 3.0 Unported License.
Based on a work from this source