Oh Yun-soo on Her Part in 'Unfriendly' Soap 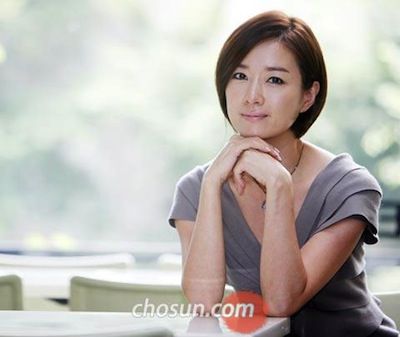 Oh Yun-soo plays the eldest daughter in a rich, adulterous family in SBS TV soap "Bad Man", and although ratings are a poor 7-8 percent, her acting has won the hearts of critics and viewers alike.

Because of the complicated family history, the plot of "Bad Man" is quite difficult to follow. "It's an unfriendly drama, so I didn't expect high rating to begin with", Oh says. "A lot of viewers want dramas that are easy to follow, something you can easily understand even if you come back after a toilet break or getting a drink from the kitchen. But with "Bad Man" you have to concentrate for the entire one hour. I shot it thinking that I want it to linger in the memory of viewers, rather than with an eye on high ratings".

Oh made her debut in 1990 among the batch of actors who passed an open audition by MBC and became popular for her innocent image. But since her marriage to a fellow actor Son Ji-chang, Oh has switched to playing married woman who are careless or a little weird. She also made a number of appearances in dramas that primarily deal with adultery such as "Bitter Sweet Life".

That is why she now asks for her two sons' permission before she picks a character. They are 12 and eight. "Because my first child is in puberty, I am concerned that he could get hurt by other people saying, 'Your mom appeared in a bed scene'. But the boys assure me that it is okay because it's just acting. I'm very grateful to and proud of them, but it's still difficult because so many people identify my character in the drama with my real self", she says.

When asked about her husband, whose last TV appearance was in the 2004 drama "The Age of Heroes", Oh says, "He is very into running a business organizing corporate events. But if he finds a suitable script in the future, he will definitely come back".

Oh turns 40 next year. "At this age, if you take even a short break, you're easily forgotten. That's why I work harder. I try to do at least one show a year no matter what", she says.