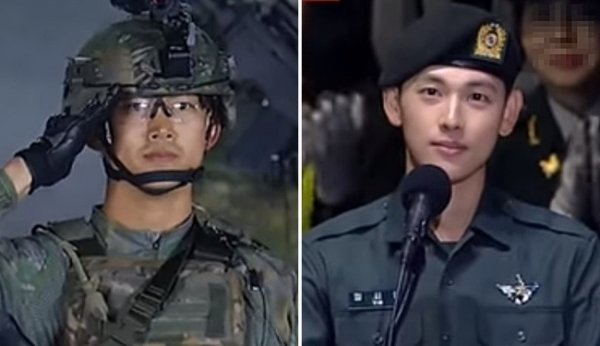 Several celebrities such as Ok Taecyeon, Im Si-wan, Taeyang, and Daesung, who are currently serving their national duties, participated in the 70th Armed Forces Day.

Singer and actor Ok Taecyeon participated at the demonstration of combat performance system at the Yongsan War Memorial Museum in Yongsan, Seoul.

His name came in first in portal sites because of netizens admiration of how well he wore his gear, The Warrior Platform. It is mainly applied to army infantry, consists of 33 types of combat coats and combat equipment, including combat clothing, combat boots, body armor, bulletproof helmets, and water cans.

Taeyang and Daesung from Big Bang are the public relations ambassadors for the 16th Ground Forces Festival from the 5th to 9th of October.

This event is the nation's largest military festival that allows visitors to watch and experience the army's advanced weapons.

"Ok Taecyeon and Im Si-wan Participate in Armed Forces Day Event "
by HanCinema is licensed under a Creative Commons Attribution-Share Alike 3.0 Unported License.
Based on a work from this source