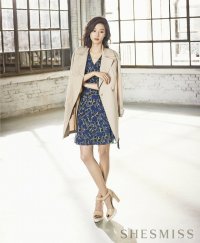 K-pop star Boa has shouldered aside Jun Ji-hyun by signing a prestigious modeling contract with Olympus Korea and will be appearing in new ads from September.

Olympus put top star Jeon up front to spearhead the digital camera revolution in Korea. In 2003, the company cast Jeon in a saccharine ad campaign that even had a title: "My Digital Story". It was such a success that Olympus held top place in the domestic market for four years straight. Jeon became the first ever commercial model in the industry to shoot four installments of an ad series, one for every season, earning her the nickname "dika queen", after the Korean shorthand for digital camera.

But the world of digital cameras is a fickle lover, and gratitude is in short supply. Olympus has had a roving eye for some time, and it has now alighted on the slinky K-pop superstar.

"Our strategy for the second half of the year is by upping the strength of our slim designs to kill two birds with one stone", Olympus says. "We felt that Boa, who satisfies both the musical world and has great public appeal while setting style trends in Asia, would best personify our product concept".

In the commercial shot Tuesday at a studio in Gangnam, Boa will show off her powerful voice and dance moves while bringing out her gentle feminine side, the firm says.