On the set of MBC TV series "Personal Taste" 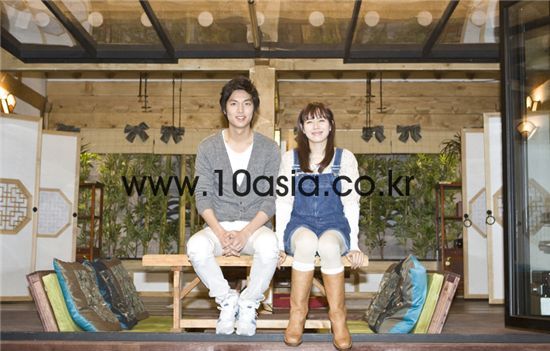 From left, actor Lee Min-ho and actress Son Ye-jin pose during a press conference for MBC TV series "Personal Taste" at the public network's outdoor set in the city of Yongin of Gyeonggi Province, South Korea on April 13, 2010. [Lee Jin-hyuk/10Asia]

It was just a water bottle shaped slightly different from the typical. But Lee Min-ho and Son Ye-jin talked about its shape as if they were extremely close friends ahead of a press conference held Tuesday on the set of MBC TV series "Personal Taste". After drinking water out of the bottle's cap which was much larger and spherical than usual, Lee kindly explained to Son, "I think this is used as a cup", resembling the delicate and composed Jun Jin-ho he plays for the show. And before Lee finishes his observation and is able to say, "But the bottom of the cap is round so it would be impossible to prop it up", Son too shows the character viewers have started to become familiar with by immediately spilling over the cap she had set on the table. As the water wets reporters' voice recorders, Son, close to tearing, hastily wipes off the moisture with tissue and mumbles, "Oh no, I'm exactly like Park Gae-in".

The reason that "Sanggojae", the house built on the set of "Personal Taste" located inside the "Dae Jang Geum Theme Park", feels closer to an actual traditional Korean-style house, is not just because of its elaborate features. "Sanggojae" comes to life the moment the two actors, immersed in their roles so much that they have slowly started to show images different from the past, enter the living room. And that is also when the house, where even the pine tree, small wild flowers and black and white pebbles placed with extreme delicacy, emerges to reveal its strong presence. As soon as rehearsals start, Lee Min-ho transforms into a new hard-working actor, reading his script as the first to take his place in the front yard of the house and helping the cameras set up. Son too becomes the meticulous actress she is, preparing for shoot while checking her lines and the line of movement she should take. "Sanggojae" does its own share of work as the only participant on set which fails to become worn out from the close-to-live shot show.

"On the set of MBC TV series "Personal Taste""
by HanCinema is licensed under a Creative Commons Attribution-Share Alike 3.0 Unported License.
Based on a work from this source