On the set of SBS TV series "Bad Man" 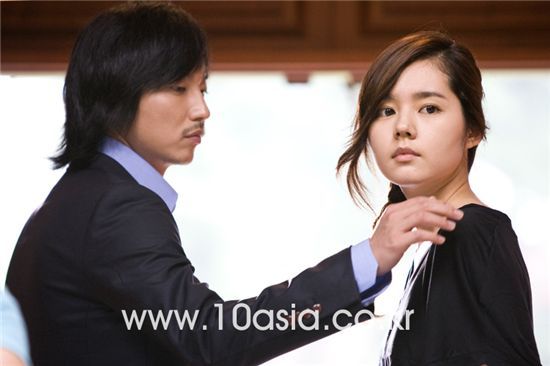 "Bad Man" - This is a TV drama, not a fashion shoot

One by one, plants that had been lined up on a long terrace are taken away. As Gun-wook (played by Kim Nam-gil) and Jae-in (played by Han Ga-in) appear through the front door, over fifty cameras simultaneously go off with flashes. This is taking place at a luxurious house with a spacious garden in the Gi-heung district of Yong-in, Gyeonggi province -- the house setting of President Hong (played by Jun Gook-hwan) on the set of SBS TV series "Bad Man".

In today's scene, character Gun-wook returns from Japan sooner than Tae-sung (played by Kim Jae-wook) and reports the situation to President Hong, which gets him into a bit of a tension-filled argument with Jae-in who wonders what is going on. The scene exposes complicated emotions, just as the subtle and changing relationship between the three characters.

The actors, who act out the scene changing angles from left to right for numerous reporters on set, continue to keep the tension alive. But as the waiting time keeps getting longer, actor Kim Nam-gil, swamped by hundreds of people eyeing him, flops down on the floor in front of the shoe rack and descends into a world of his own. Reporters, who had been closely surrounding the actor, are taken aback by his behavior.

Never raising his voice despite hectic situations was director Lee Hyeong-min, who had been working everyone on the set in his unique gentle way of talking to people. He expressed his confidence for the show, saying the upcoming episode -- after a one-week absence due to the World Cup broadcast -- gets even more entertaining. But he cannot conceal his disappointment about the [low] viewership ratings, saying "But the ratings..". On June 23, the sixth episode will be broadcast from 9:20 p.m., a half-hour earlier than the previous airtime. For those who do not want to miss out on the complicated five-way romance among Gun-wook, Tae-sung, Jae-in, Tae-ra and Monet, take note!

"On the set of SBS TV series "Bad Man""
by HanCinema is licensed under a Creative Commons Attribution-Share Alike 3.0 Unported License.
Based on a work from this source