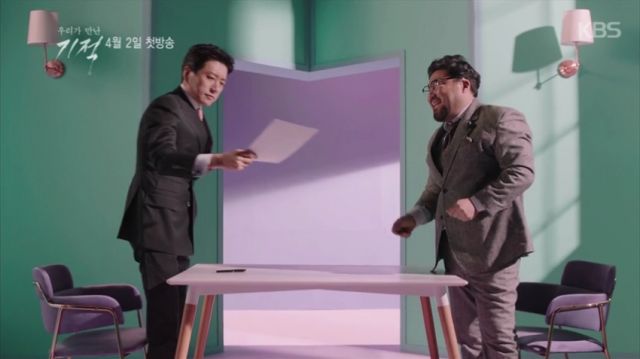 When "Miracle That We Met" was first announced as a series about a man with two wives and two families, I assumed we had a very elaborate cheater on our hands. It's definitely not the kind of premise I would go for, or a type of character I'd want to follow through said juggling of two unsuspecting women and several children. Boy, was I wrong on that one.

"Miracle That We Met" has since been releasing stills of its leads, and upon seeing the first teaser released this past week, I finally got an idea of what this is really about. Double roles turn into double souls for this drama, as one character enters another one's body following his death to a car accident. The hero then has to support his own loved ones, as well as the ones of the man whose body he is using.

So this is less about a romantic conman, and more about a "Please Come Back, Mister"-like situation of a second chance with double responsibilities. I'm still royally confused about the mechanics of this, however. Does one body have both souls, or does one soul enter an empty body? Is the hero who dies, and who we will be following the man who used to be Ko Chang-seok, or the man who used to be Kim Myung-min?

Things are definitely getting more interesting in "Miracle That We Met", but I still dread entering another work by Baek Mi-kyeong after "Strong Woman Do Bong-soon". For now I'll just cautiously explore. "Miracle That We Met" will begin its run on April 2nd on KBS 2TV.