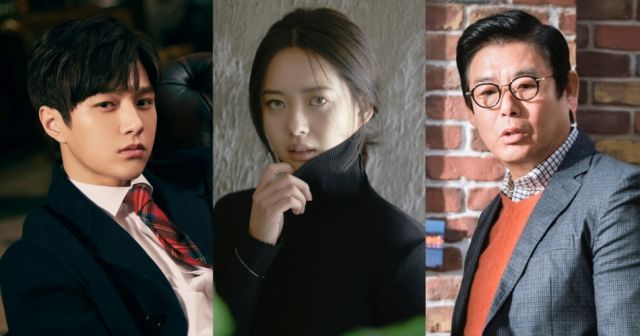 The main cast of "Miss Hammurabi" is settled and it brings variety and reunions. The upcoming jTBC legal drama is another 100% pre-produced piece and it has finalized its main cast of Go Ara, Kim Myung-soo and Sung Dong-il as three judges. I'm not sure how the cast would work chemistry-wise outside of the reunited Go Ara and Sung Dong-il, but it does sound like a fun combination in terms of character descriptions.

Go Ara plays judge Park Cha Oh-reum. She turns the court upside down and she does not tolerate injustice. Her charisma and bright, positive energy draw people in. Kim Myung-soo plays judge Im Ba-reun, an elite who has good looks and smarts. Ba-reun follows the rules and has no interest in climbing the career ladder. Due to his rigid perception of the law as an absolute, he clashes with Oh-reum's more idealistic personality. Finally, Sung Dong-il plays Han Se-sang, a man who passed the exam at a later age and is therefore more realistic and wise in his approach.

"Miss Hammurabi" is directed by Kwak Jeong-hwan, who is responsible for works such as "The K2", "The Fugitive Plan B" and "The Slave Hunters", so I'm not sure what to think about that. His latest is definitely not an encouraging one for me. On the other hand, the original writer of the novel this drama is based on, Moon Yoo-suk, will be writing this. As he is a judge himself, he definitely knows his subject matter.

I'm glad that pre-production continues to be embraced by many a show, as I consider it to be the most sensible system for this type of a creation. I'm still not sold on the drama's concept or all of its creative participants, but I'll be keeping an eye on it. "Miss Hammurabi" will premiere this May.