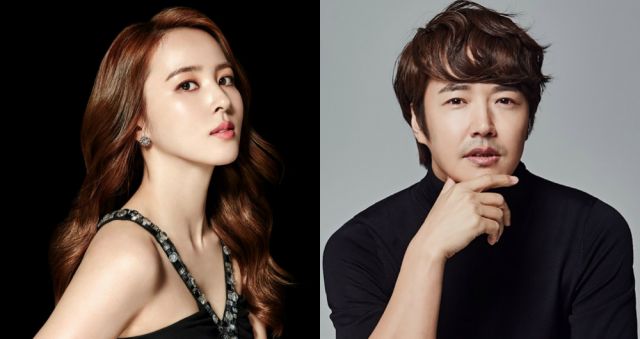 In the beginning of this month I talked about the possible pairing for "Let's Watch the Sunset", so I'm glad to now tell you that Han Hye-jin and Yoon Sang-hyun have confirmed their roles. The two will be playing a married couple going through divorce, the appearance of new and old loves, and the ultimate separation of death.

That last bit means that I still won't be watching this, but it's the stuff that happens before said death which might be interesting. Han Hye-jin's Nam Hyun-joo was previously reported as someone who sacrificed a lot for her husband, until news of her upcoming demise make her suddenly as for a divorce. It looks like the marriage was not one she happily sacrificed for, because our heroine wants to experience true love with someone else before she dies.

Given that the not-good-enough husband, Kim  Do-young (Yoon Sang-hyun) is shocked by her request for a divorce, I take it that he's the kind of man who doesn't understand the concept of emotional labor and sacrifices. He's definitely not very perceptive, because marriages don't just up and end without the cracks starting to form.

I think the two actors will make an interesting pairing. The drama's element of reconciliation and the reassessment of the important things and people in life will hopefully be a stronger focus than the tearjerker aspect over tragedy about to befall the couple. "Let's Watch the Sunset" is written by Jeong Ha-yeon ("Cruel Palace - War of Flowers", "Queen Insoo") and directed by Jeong Ji-in ("Radiant Office", "Shining Romance"). It will air in March on MBC.