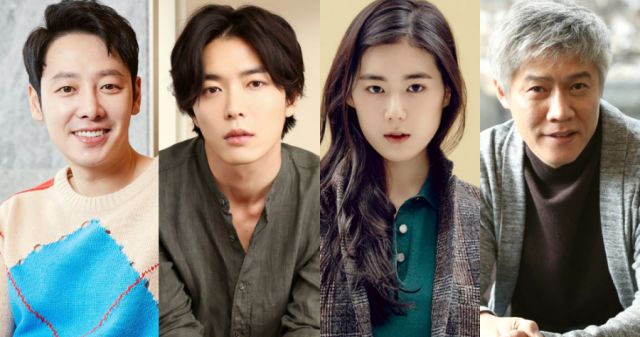 I choose to have dramamnesia over my past experience with the writers of "The Guest - Drama", because this cast is to die for and I want to enjoy it in its full glory. Kim Dong-wook, Kim Jae-wook and Jung Eun-chae have officially accepted their roles as the three heroes of OCN's upcoming exorcism-themed drama "The Guest - Drama", also known as "The Guest - Drama", while Park Ho-san has also joined them.

The character information is pretty much as we've seen reported before on the two heroes, as well as the heroine. Kim Jae-wook is Choi  Yoon. He is the cold, cynical priest, who is skilled, but who alienates people. Jung Eun-chae is Kang Gil-yeong, the fiercely dedicated, but warm and caring detective. She doesn't believe in the supernatural, but she gets involved in exorcism affairs with the other two.

We do get a bit of an ominous change with Kim Dong-wook's Yoon Hwa-pyeong, however. The psychic, who no longer appears to be a detective as originally reported, has an easy-going personality. Underneath it, though, he is hiding darkness. I mean, The Evil™ will do that to you. Can't have a man who can sense it without trauma. Park Ho-san plays Go Bong-sang, a detective working alongside Gil-yeong who is also her uncle figure.

"The Guest - Drama" will be airing in September, and that means we have plenty of time to hype this up in our minds. I'm hoping that the writer duo will redifine themselves, and that they and PD Kim Hong-seon-I will make a good team. Just look at this cast and premise. I'm weak, I tell you! Weak!