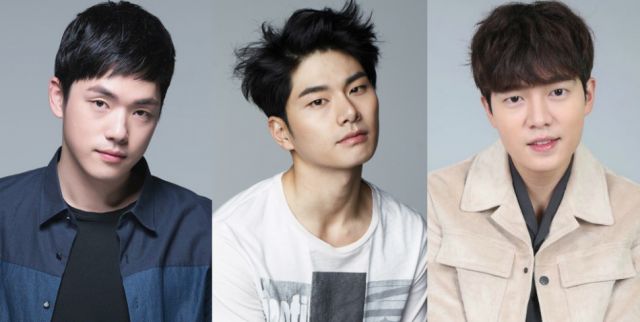 The upcoming jTBC sitcom drama about a trio of unfortunate young men running a guesthouse named "Waikiki" has finally found its aforementioned trio of unfortunates. Kim Jung-hyun, Lee Yi-kyung and Son Seung-won will be the entrepreneurs-by-force as they meet new tenants while chasing their dreams.

Kim Jung-hyun ("School 2017", "One Day") plays Gang Dong-goo, an aspiring director whose aspirations have taken him nowhere. Once a promising new filmmaker enjoying recognition for his short film, the young man quickly discovered the harsh reality of building a career. His failure has made him cynical, but he has a kind heart. He wants to use the guesthouse in order to fund the revitalization of his filmmaking efforts.

Lee Yi-kyung ("Go Back Couple", "Baby Beside Me") will be Cheon Joon-gi, the "man with the plan" who sparks the idea of a guesthouse for funding his career alongside Dong-goo. The character is a troublemaker and his dream is to become a grand actor like his famous father. His luck on that department is as bad as Dong-goo's, so the two join forces for a less-than-sound course of action.

Son Seung-won ("Age of Youth" 1 and 2, "Giving Happiness") is the third partner of this trio and I'm guessing you can see the pattern by now. The kind-looking, but cunning when necessary man is a screenwriter who came to Seoul for success and ended up freelancing while chasing his own dream. He joins the other two in hopes of participating in their future film.

The work sounds like another youth ensemble drama and given how well those have been doing lately, I bet it will have eager viewers waiting for it. MBN's "539 Yeonnam-dong" has a slightly similar theme, although the format seems different so far and MBN's drama might be going for more diversity in characters. Variety is good, so a warm welcome to both dramas.

"Laughter in Waikiki" will follow "Just Between Lovers" on jTBC in February. It is produced by Lee Chang-min-I ("Man to Man", "Remember") and written by Kim Ki-ho ("Kidnapping Assemblyman Mr. Clean", "Modern Farmer").