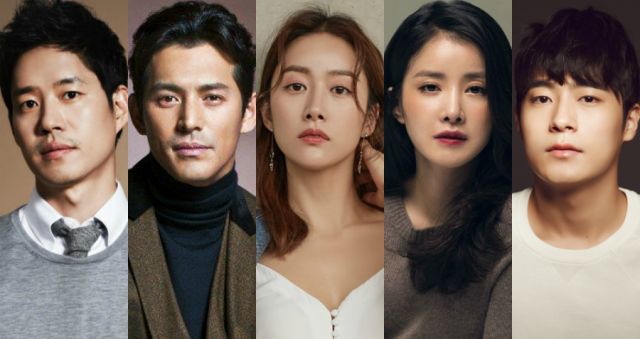 The family of "Liver or Die" is now complete, according to several news pieces. The production has reportedly cast Yu Jun-sang, Oh Ji-ho, Jeon Hye-bin, Lee Si-young and Lee Chang-yeop as the previously reported siblings, starting from oldest to youngest in the aforementioned order.

Yu Jun-sang plays the titular Lee Poong-sang, the eldest brother and father figure of his family. Having raised his four siblings, Poong-sang has never lived for himself, and now experiences change in his life. Oh Ji-ho's second oldest, Lee Jin-sang, is the family's "lost cause", who lives a lonely, slothy existence following one wrong decision in life. He is not a bad person, but he is clumsy and unkempt.

Jeon Hye-bin's Lee Jeong-sang is next, and she is the older of two twins. Jeong-sang is a university hospital doctor, and the family's voice of reason. She is an all around logical and cool person, and she is Poong-sang's pride. Lee Si-young is the younger twin, Lee Hwa-sang, and she is the family's black sheep along with Jin-sang. Hwa-sang has developed an inferiority complex towards her sister, and she frequently lashes out at her family.

Lee Chang-yeop is the family's youngest, Lee Wi-sang, who looks like he could be Poong-sang's son. He is someone who lives in pain of not being able to realize his dream of becoming a professional baseball player. It looks like Poong-sang will have his hands full with this family. Strength to him. "Liver or Die" will air in January on KBS 2TV.