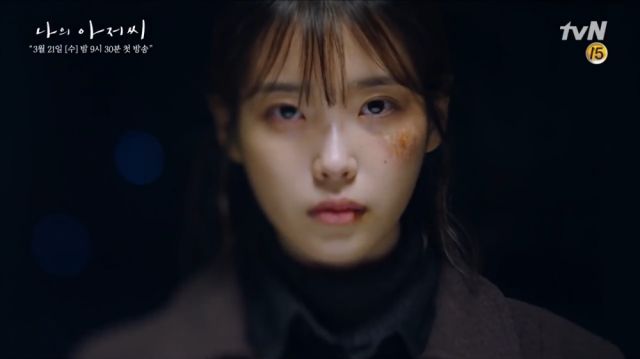 I haven't been following "My Mister" very closely, so upon hearing that heroine Lee Ji-an (IU) has had a tough life, I assumed that it referred to the usual type of a young woman's problems. The promotional material released tells an entirely different story, however, and it looks like Ji-an has quite the dire burdens to bear.

The second teaser featuring IU follows her character through some scenes of poverty, despair and possible dating violence, before revealing her face as battered and bruised. The seemingly detached, sombre woman speaks in voice-over, providing some cryptic words.

It makes me wonder what type of life she had, and why it crumbled so fast before her eyes. The teaser is short, but the imagery, the sound, and the actress's narration are very impactful. It piques my curiosity, because this doesn't look like a woman whose only need is a romance. But if a romance won't be happening, how will the hero help heal her?

"My Mister" captivates me more with every still and video released, which I really didn't expect when it was first announced or when earlier news started to surface. I'm be following it closely for more.