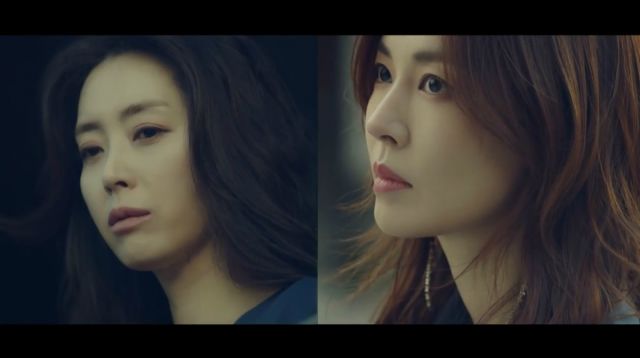 Much has been teased about the mysterious college admissions caretaker of "Secret Mother", but it looks like she can't hold a candle to the ever vigilant, ever ready for a fight women of the neighborhood she enters. The first teaser is quite the entrance for Lisa Kim.

A lot has changed in the story as more news on it comes out, and the fresh character descriptions tease even more, which I will talk about sometime this week. The teaser itself sets the basic premise, while revealing the cast of neighborhood bullies. "My sister disappeared", says Kim Eun-young (Kim So-yeon), also known as Lisa Kim. "A trace of her remains in this townhouse."

That is when the women of this rich area start revealing their prejudice and anxieties. "A woman I've never seen before appeared", says Myung Hwa-sook (Kim Jae-hwa), followed by Song Ji-ae's (Oh Yeon-ah) remark that "It's obvious she doesn't belong here." In comes Kang Hye-kyung (Seo Young-hee) with the final blow; "If that's the case, shouldn't we quickly get rid of her?"

Eun-young has a mission that pushes her forward, however. When she arrives at Kim  Yoon-jin's (Song Yoon-ah) house, she drops her motivation right there and then. "The secret about my sister is in this house." That is when her fellow heroine appears, looking sombre and cold. "A woman came into our house" she says. "After that, cracks began to form in my life."

This is a pretty cool and stylish teaser, but it does make me curious about the type of story we'll be getting. The character descriptions paint quite the messy neighborhood as well, to the point of soapy extremes. I hope that this will be more of a mystery than a collection of nasty women's stereotypes trying to gossip an outsider into submission.

Since this is a woman-centric weekend series, I have a lot of worries about how it will treat its characters. Aside from soaps about nasty upper class anxieties not being my thing, I would definitely be sad if this is all there was to a series about older family women; a type so often mistreated in fiction. I will park those worries for now, because I can see great potential in this, which is why I'm taking it on for episode reviews once it airs.

"Secret Mother" will be out starting May 12th. It will air four 35-minute episodes each Saturday, so grab water, snacks and a comfy clothing item.