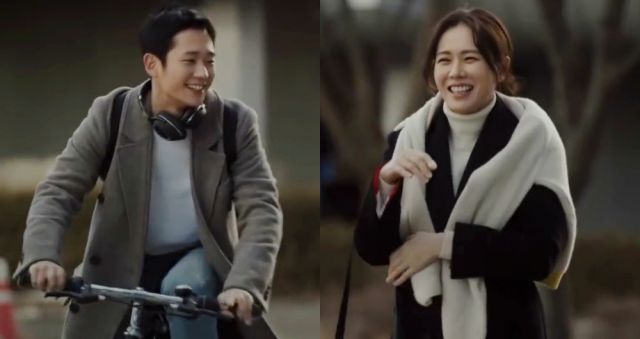 The cutesy "noona courting" continues in the second teaser for "Pretty Sister Who Buys Me Food". This time around, Joon-hee (Jung Hae-in) is happily riding a bicycle around a playful Jin-ah (Son Ye-jin), while we hear a voice-over of them chatting about the time he first saw her upon returning to Korea.

Joon-hee was leaving his office on a bike that day, when he saw a very pretty woman. To his surprise, the woman was Jin-ah, but she wasn't the Jin-ah he remembered. When Jin-ah asks him if he was disappointed, he replies that he was surprised, and wondered if the Jin-ah he knew had always been so pretty.

The teaser keeps the dull color scheme and the background song as "Stand By Your Man", the latter hopefully not being an indication that we're in for a problematic youth. I don't worry just yet, as Korean dramas rarely pick music that actually fits the content of their promotional material, and the washed out visuals are just Dramaland trying to be edgy sometimes.

While I previously worried about the show's promotion playing up Joon-hee's youthfulness, the second teaser shows us that the heroine enjoys this side of him, which may just be what she is missing in her life. The two actors look lovely together, so here's hoping that the story can deliver.