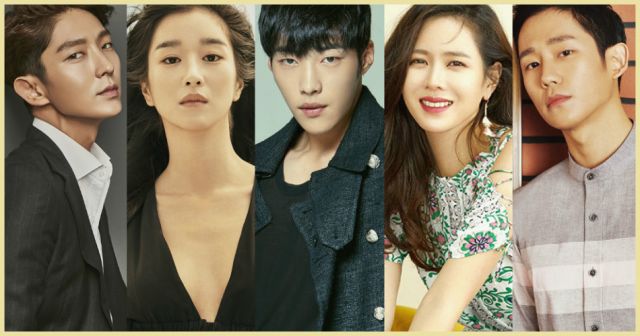 Spring is arriving in Dramaland, and with it come all manner of romances. Some are not happy at all, which seems to be the case for "The Great Seducer" and its terrible game of love. The series has released new promotional goodies, and so has a happier romance, "Pretty Sister Who Buys Me Food". At least our spring will be balanced.

"The Great Seducer" is still not convincing me as capable of handling the story it is based on, but promotion is striking hard these days, and it is focusing a lot on its leading men. We have stills of Kim Min-jae-I in seductive mood, as well as stills of him and Woo Do-hwan sporting climbing gear. More on the juicy side, the series has released a dark, noir-style poster and a very dramatic trailer. Let us hope that the drama will not be all style and no substance.

In much brighter news, "Pretty Sister Who Buys Me Food" has started rolling out its own goodies, and they do look awfully cute. We have stills of Jung Hae-in, as well as stills of the two leads having one of their titular rounds of food, while our hero is lovingly looking at his noona. Its first teaser was just released yesterday, and while it is a bit too juvenile for my liking, I hope that the series will tackle its topic gracefully.

Slice-of-police-life "Live" has released stills of its cast in martial arts training this week, as well as two lovely new posters, while we have a new angsty teaser for "Let's Watch the Sunset". "Switch - Change The World" gives us a little glimpse into its cast with script reading photos, and we have some exciting casting news as well. Kang So-ra and Yoon Hyun-min have taken up "Mama Fairy and the Woodcutter", while Lee Joon-gi and Seo Ye-ji have confirmed "Lawless Lawyer", and therefore confirm our screens exploding with charisma.

There are some changes in my drama schedule coming up that have left me chasing after my backlog and forming future plans, but the opening week of "Queen of Mystery 2" was nice, and "Mother - Drama" is still riveting. With "A Korean Odyssey" ending soon, I may finally have time for everything on hold. This drama year is ruthless. Are you keeping up with your shows, folks?