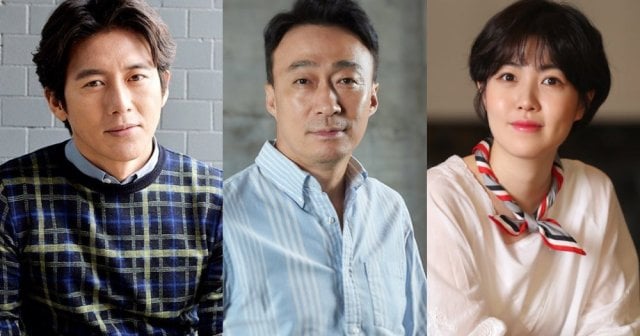 If you're a glutton for punishment and don't have enough economic insecurity and anxiety in your life, tvN's got you covered with "Money Game". The upcoming financial suspense series has confirmed its casting of Go Soo, Lee Sung-min and Shim Eun-kyung, clearly going for that sweet Chungmuro appeal to torment us with.

"Money Game" is a drama about the fierce conflict taking place between people of different convictions during the efforts of the Financial Services Commission to prevent a national tragedy amidst rising anxiety over an imminent "second IMF crisis" sparked when banks with government shares are faced with bankruptcy. Now say this ten times very fast without panicking.

Go Soo is Chae I-heon, a high-ranking finance official who hides his identity and silently performs his duties in hopes of being recognized on his own merits. I-heon, who is the head of the Economic Policy Bureau of the Financial Services Commission, is actually the son of Korea's top economist, but he chooses to walk a different path in life than his father.

Lee Sung-min is Heo Jae, the ambitious Chairman of the Financial Services Commission who will do anything in order to accomplish his goals. After being disillusioned by the hopeless economic structure of his country during the International Monetary Fund crisis, he has become determined to do anything, even if it's a crime, in order to strengthen that structure.

Shim Eun-kyung plays Lee Hye-joon, a new office worker who dreams of becoming a home owner and living a simple life. Hye-joon, who grew up in a difficult family environment due to the IMF crisis, worked hard and just joined the Ministry of Economy and Finance's International Finance Bureau in order to gain favorable loan conditions as a civil servant.

The premise is definitely a thrilling one, and there's clearly interest in works that take on entire societal structures and their systemic problems. The series is written by Lee Young-mi and direcred by PD Kim Sang-ho-I, who is known for works such as "Arang and the Magistrate", "Splendid Politics" and the recent "Spring Turns to Spring". I'm not sure I can handle this particular brand of stress, but "Money Game" is definitely wooing me hard here. The drama will be out in the first half of 2020.