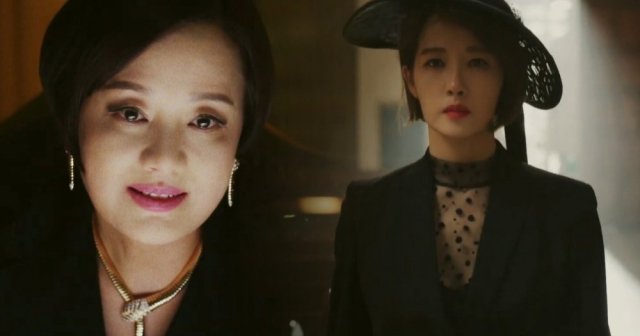 There's melodrama, makjang, and then there's über-makjang, but SBS's upcoming "Secret Boutique" is aiming right for that sweet spot before the tense turns to the extreme in its first teaser. Joining the ranks of works like "Misty" and Kim Sun-ah's very own "Woman of Dignity", "Secret Boutique" is dropping its 'soapy noir' thriller goodness on us without mercy.

The teaser's atmosphere is tense, stylish, and very, very dramatic. What is essentially a typical 'evil stepmother' story unfolding before our eyes takes new dimension under the sheer animosity and ferocity of our leading women. We start off with protagonist Jenny Jang (Kim Sun-ah) as a child. Her despotic guardian poses a question: "Between you who is new to this house, and me, the lady of the house, who do you think people will believe?"

But Jenny will not crumble, and she will pay what looks like a highly traumatic era of growing up back tenfold. A now older Jenny contemplates human motivation. "There are people living in two different timelines in this world. One is a person who lives looking to the future, the other lives in a past where time has stopped".

Jang Mi-hee's hell-spawn of a mother figure can't tell which one our protagonist is anymore, clearly spotting a major change in her. "Where is the fragile deer I took in 20 years ago", she says. "It looks like a white fox with 100 tails has taken its place". Said fox is out for blood, letting out her battle cry of "I'll take you down with my own hands. I'll crush you and make it so that you'll never be able to recover!"

What happened in this woman's life has decisively veered her towards the fight side of the fight or flight instinct, in what she now perceives as a battle for survival. "There are no second chances", she says. "You have to survive here and now! Even if you have to deceive and trample on others". The teaser closes with the tagline bringing us right back to the title. 'A secret place where dark desires become entangled'.

I don't know about you, but I need to sit back down and breathe for a moment. "Secret Boutique" is definitely entering the genre of melodrama fully committed. The extreme nature of this story could very easily turn into makjang, but I hope that we get a solid character thriller instead. Our leading women are clearly capable of carrying it, after all.