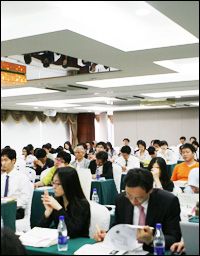 Younghoon David Kim, chairman of energy, environment and culture-based business Dae-sung Group, had a nice surprise in China two years ago when he was on a business trip.

An executive from China Film Group Corporation, the largest and most influential state-run film enterprise in China, expressed deep enthusiasm about forging a partnership with Kim's business which invested part of its capital in producing cultural products.

"I was told that Korean soap operas were very popular there. Due to the guidelines set by the government, Chinese people were allowed to watch made-in-Korea dramas only after 10 p.m. Despite the inconvenience, families gathered together in front of television late at night to watch Korean dramas", said the businessman.

Before the business trip, Kim confessed he thought the Chinese madness to hallyu was waning.

"To link the enthusiasm to business opportunities, I think we need to stop using the term hallyu that embraces some defensive meaning on made-in-Korea cultural products in China", he said.

Chinese media coined the term of hallyu ― meaning that foreign cultures are alarmingly assimilated into the local culture ― back in 1999 to refer to its people's quick fascination with Korean cultural products such as dramas, actors, actresses and singers.

To help the Korean wave become a global cultural icon, Kim said it was necessary for industry experts to look beyond narrow-minded national identity and seek partnerships at a global level.

Kim presented the ideas at a hallyu forum prepared by the Korea Foundation for International Culture Exchange (KOFICE) in collaboration with the Federation of Korean Industries (FKI) at a hotel in Seoul Tuesday.

Entertainment industry professionals, business leaders, think tank experts and government officials participated in the event in an effort to find room for a possible public/private partnership.

Prof. Park Jung-sook of the Institute of International Education at Kyung Hee University, a broadcast journalist-turned-culture expert, led the round table discussion as a moderator.

In a speech to the forum, Shin Hyun-taek, chairman of KOFICE, lauded made-in-Korea products for their contribution to building a positive image of Korea overseas.

Go Jung-min, chief researcher at Samsung Economic Research Institute, said the tourism industry benefited most from the Korean wave as Asian fans had first-hand experience in Korea by visiting the venues that had appeared on the hit dramas they watched.

Hwang In-hak, deputy secretary general of the industrial research division at the KFI, expressed concern about the waning effect of hallyu on the economy.

He advised the entertainment industry to generate creative stories with solid storylines to meet the rising expectations of viewers overseas.

During the forum, industry experts expressed worries over the challenges facing them.

"Seven out of ten dramas that we have produced fail to get the revenue that we aimed for", Park Chang-sik, vice president at KimJongHak Production, said of the grim reality facing production companies.

He continued, "There is a role that the public sector can play to help the entertainment industry, and providing businesses with low-interest loans will help us focus on creative activities".

Ted Tae-geon Seo, general director of industry division at Korea Creative Content Agency, was positive about the prospects of the game industry.

He forecast that the industry will continue to grow by approximately 10 percent per year in the near future, adding poor resources regarding the global game market poses a business challenge.

Lee Chan-buom, director general of the Presidential Council on Nation Branding, said culture and tourism are priorities that the committee will focus on as part of its branding strategy.
______________________
Participants listen during a forum on hallyu, or Korean wave, which was organized by the Korea Foundation for International Culture Exchange in collaboration with the Federation of Korean Industries at the Koreana Hotel in Seoul, Tuesday. The forum was attended by entertainment industry professionals, business leaders, government officials and college students.
/ Courtesy of Asia Treasure Network

"Panelists Discuss Ways to Open New Era for Hallyu"
by HanCinema is licensed under a Creative Commons Attribution-Share Alike 3.0 Unported License.
Based on a work from this source