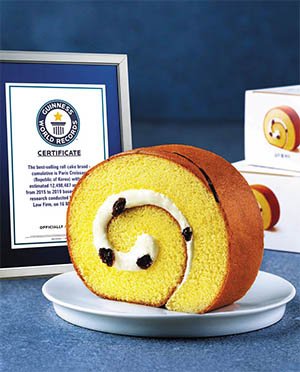 The Paris Baguette bakery chain has set a Guinness world record with its Silky Roll Cake, which is filled with whipped cream and raisins.

No fewer than 12 million Silky Roll Cakes were sold in outlets in Korea, China, Singapore, Vietnam and the U.S. since January of 2015.

A ceremony was held at SPC's headquarters in southern Seoul and Guinness World Records' head office in London on Wednesday and broadcast on YouTube to celebrate the landmark.

"Paris Baguette Sets World Record for Bestselling Roll Cake"
by HanCinema is licensed under a Creative Commons Attribution-Share Alike 3.0 Unported License.
Based on a work from this source