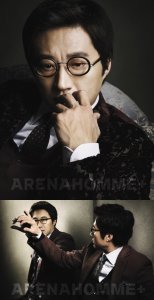 Top-rated actor Park Shin-yang will not be able to appear in any dramas for the time being.

The Corea Drama Production Association (CODA) last Friday banned Park, 40, from starring in any dramas produced by members of the association for an indefinite period. Park, when filming hit TV drama "War of Money" (2007), asked for 170 million won per day per additional episode beyond planned. He appeared in four additional episodes, but producers failed to pay him the 682 million won. Park consequently sued them.

While they are not part of the association, it reportedly carried out the rather harsh action to remind actors that they were indeed having a hard time together.

"The sum of 170 million won per episode is more than what is paid to an outsourcing production company by a broadcaster. Park asking for this amount of money cannot be tolerated, as it has affected everyone in the drama production business, from writers and producers to technical staff", Shin Hyun-taik, the president of CODA, said through a press release.

"A drama is something made by not only actors, but also writers and the whole crew", he added during an interview with the Korea Broadcasting System Saturday.

Regarding the issue, some Internet users conversely argued that it was not fair for the association, which is comprised of some of the biggest production companies, to ban only Park from appearing in dramas made by their members when there were many others who had already received high and even higher paychecks before. Park recently portrayed painter Kim Hong-do in the hit television drama "Painter of the Wind",

Park recently expressed his thoughts through his Web page, saying that "the drama `Painter of the Wind' was an original work", and that "when the severe and long times pass, there are always flowers blossomed in the fields".