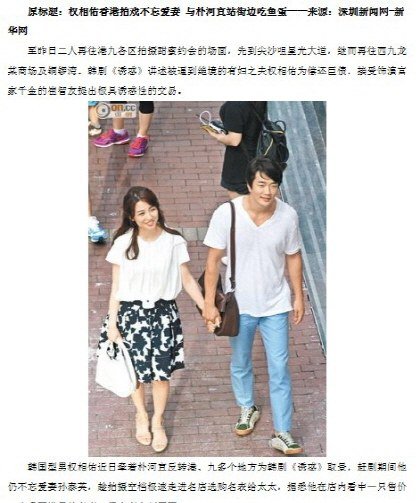 The two were seen in China when they were there filming for the new SBS drama "Temptation".

Chinese media reported with pictures of the two and claimed it was the coming together of the original Hallyu star and a new one. kwon Sang-woo's dramas made a big hit in China and he even starred in a Chinese movie. Park Ha-sun's "Dong Yi" was introduced to China and her recent drama "Three Days" is currently causing a stir in China.

Park Ha-sun's agency claims, "She's been getting love calls from everywhere ever since "Three Days" was revealed in China. However, she's currently going to concentrate on "Temptation" for the time being".

"Temptation" is about a man who is pushed to the edge of a cliff and makes a choice he will never be able to take back. The cast is made up of kwon Sang-woo, Park Ha-sun, Choi Ji-woo and Lee Jung-jin.

"Park Ha-sun and Kwon Sang-woo film "Temptation" in China"
by HanCinema is licensed under a Creative Commons Attribution-Share Alike 3.0 Unported License.
Based on a work from this source