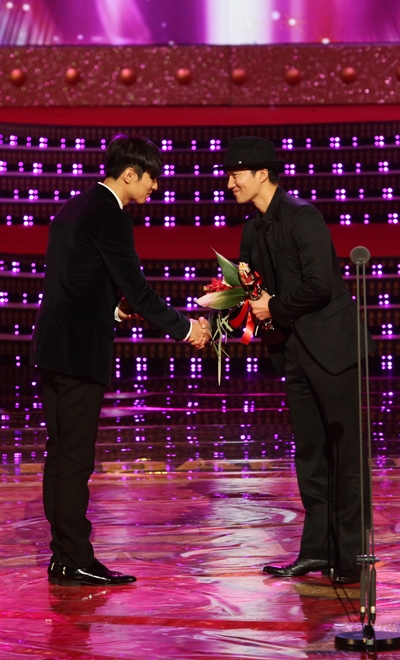 Won Bin (left) and Park Hae-il are shaking hands at the 48th Daejong Award Film Festival and smiling shyly at each other.

Park Hae-il received the Best Actor Award for "Arrow, The Ultimate Weapon" at the 48th Daejong Award Film Festival on the 17th, held at the Seoul Sejong Cultural Center. This is his first Best Actor Award in 5 years since the 2006 Director's Cut Aawrds.

Won Bin and Park Hae-il met on stage. Park said, "I didn't know Won Bin was going to hand me over the award and I appreciate it".

"Park Hae-il and Won Bin's shy eye exchange"
by HanCinema is licensed under a Creative Commons Attribution-Share Alike 3.0 Unported License.
Based on a work from this source