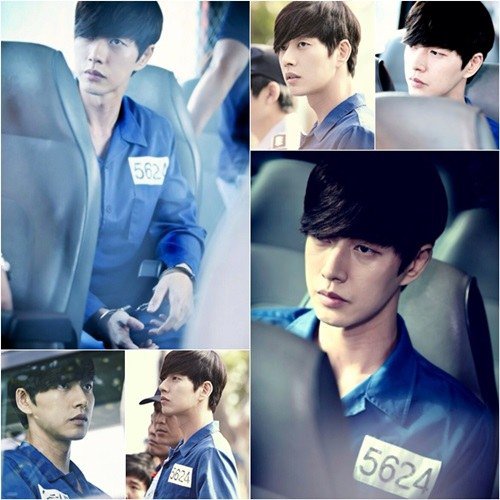 Park Hae-jin was seen in a prison uniform.

Pictures were released by his management that displayed Park Hae-jin portraying a psychopath, wearing prison clothes and standing while handcuffed.

Park Hae-jin takes on the role of Lee Jeong-moon, a psychopath who is being transferred by bus for murder charges. The question is why he committed such horrible murders.

Lee Jeong-moon, who has an IQ of 160, is the youngest member of Mensa and the youngest math and philosophy title holder. However, he has the innards of a psycho as well as a story behind his life.

Playing the first psychopath role of his life, even though Park Hae-jin is acting serious all the time and is trying to put on the character of Lee Jeong-moon, he still manages to look breathtaking.

Park Hae-jin's good looks even allow him to pull off the character image of a prisoner. His height and pretty face give him a certain aura which is increasing the anticipation of his character.

Meanwhile, "Bad Guys", which is to go on air for the first time on the 4th of October at 11PM, is about a detective who gathers criminals to assemble even worse criminals and puts them in jail. The cast includes Park Hae-jin, Kim Sang-joong, Ma Dong-seok, Jo Dong-hyuk, Kim Tae-hoon, Kang Ye-won and more.

"Park Hae-jin in prison clothes and cuffs, in upcoming drama "Bad Guys""
by HanCinema is licensed under a Creative Commons Attribution-Share Alike 3.0 Unported License.
Based on a work from this source