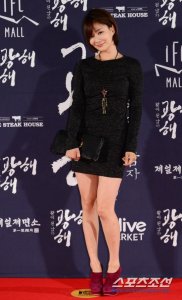 She is said to have debuted 6 years ago, but went rather unnoticed until the MBC drama series 'Air City' which ended in July.

Park Hyo-joo gathered attention through the role as Lee Jung Jae's junior NIS agent in 'Air City' also starring Choi Ji Woo. She was the playful and cool tomboy amongst a group of male agents. With her thin features, black suit, and short hair, she brought out the question amongst viewers, "Who is that?"

And she finally was cast as the main lead in the upcoming MBC DramaNet series "Joseon Scientific Investigation Team - Byul Soon Geom" ("Chosun Police Season 1") with On Joo-wan.

"It's like a dream. I am truly enjoying going to the set and they say it is difficult because it is a historical drama, but I'm just enjoying everything about it".

As an actress, she was different for the norm. I expected Park Hyo-joo to be tough from her image in 'Air City' but she was completely different in real life with her usual 'eye smile' but a lady indeed, long and lean.

She is 'Damo ' in "Byul Soon Geom" ("Chosun Police Season 1"), the same role that became famous as the role Ha Ji-won played in the series "Damo". Her role as Yeo Jin is a born with intelligence and possesses great martial arts skills which contribute to solving various crimes. Of course she is excited to be taking on her first lead role with such charm.

"I look rather modern so I couldn't even think of being in a historical drama. But with the magic of makeup and costumes, I don't look so bad. I wear a Hanbok and add on hair extensions. I will look completely different from what I did in 'Air City'".

She fell into a slump many times despite her increasing filmography from the box office worker in 'Superstar Gamsayong' to various other supporting roles.

"There were times when I didn't have any jobs for about a year. I became worried and very depressed not knowing what to do. But now I think there is a time for everything. When I was cast in 'Air City', I felt that the time had come. However, now I'm worried I won't be able to live up to expectations".

Park Hyo-joo studied Korean traditional dance from third grade to her senior year in high school. Though she folded her dream of becoming a dancer, she says it helps her with acting in many ways.

"Dance becomes a great foundation in terms of movement when acting. In 'Byul Soon Geom' ("Chosun Police Season 1"), riding the horse is important and it was relatively easier for me to learn. I was scared when I fell off during training, but I soon realized the rhythm and got used to it".

This series will be the second by MBC DramaNet in which they comment, "We are sure it will gather popularity that overcomes the limitations of cable and satellite channels".

Park Hyo-joo says, "Filming a historical drama gives a strange feeling that I have been transported to my former life. I feel like I am in a fantasy traveling back in time", and smiled.