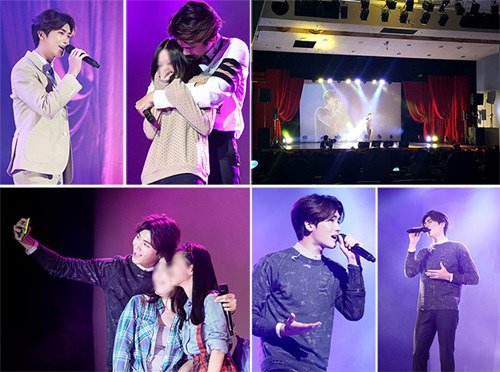 ZE:A - Children of Empire Park Hyung-sik's fan meeting in Japan was a success.

He had an exclusive fan meeting in Tokyo on the 12th as an actor.

The fan meeting was held twice and both times Park Hyung-sik mesmerized his fans with excellent fan service. He delivered self-prepared presents to his fans and even walked the crowd with one of his fans hand-in-hand during a game. He communicated with his fans as closely as possible.

He also sang the OST of "The Heirs", "You're My Love" and "Beautiful Girl" by ZE:A - Children of Empire. He also sang a Japanese song called "Hitomio Tojitae" perfectly.

Park Hyung-sik expressed his gratitude to every one of his fans after the meeting and showed how thoughtful he was.

He said, "I was very nervous as this is my first fan meeting, but I am so grateful to those who came and spent time with me".

This fan meeting will be broadcast in 80 minutes on KNTV in December and Park Hyung-sik's "The Heirs" will be on air from the 19th.

"Park Hyung-sik's fan service in Japan"
by HanCinema is licensed under a Creative Commons Attribution-Share Alike 3.0 Unported License.
Based on a work from this source