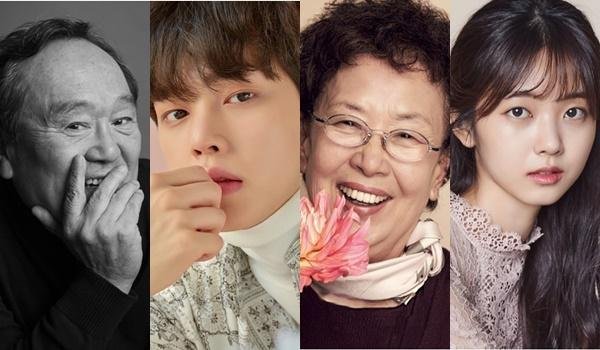 Based on a webtoon of the same name, "Like Butterfly" is a drama about the growth of Deok-cheol, who started ballet at the age of 70, and Chae-rok, a ballerino who wanders in front of his 23-year-old dream. The journey of a 70 year-old man standing at the edge of his life and a 23 year-old youth whose life is just beginning unfolds. As director Han Dong-hwa and writer Lee Eun-mi-III, who made a strong impression in the small screen with "Tunnel - Drama", have joined forces and are drawing keep attention to "Like Butterfly".

Park In-hwan plays Deok-cheol, a retired mailman who brings out his dream of ballet at the end of his life. He challenged ballet to achieve a real life and long-cherished desire that is more beautiful than flowers. Park In-hwan, who has been showing off his solid acting skills in every film he stars in including "Exit - Movie", "Miss Granny" and the drama "Liver or Die" will start to renew his life character.

Song Kang, who is drawing attention as a handsome character, plays Chae-rok, a 23-year-old young man who has special talent but is lost in reality. Chae-rok, who had never thought about anything other than soccer, happens to see a ballet performance and feels an emotion that cannot be in words for the first time in his life, and his life changes when Deok-cheol appears in front of him. Expectations are already high for Song Kang's acting transformation, which is solidifying its position in name and reality with Netflix's "Love Alarm" and "Sweet Home".

Na Moon-hee will play Hae-nam. Hae-nam is Deok-cheol's wife who takes care of her life and the lives of her grown children. She just wants to live a quiet life without burdening her children but one day Deok-cheol tells her he wants to do ballet. Na Moon-hee, who has been showing off her solid acting career for more than 10 years through the various films such as "Miss Granny" and creative musical "Seoul 1983", is 'soul mates' with Park In-hwan in this drama. The couple's chemistry is expected to captivate viewers once again.

The role of Eun-ho is played by Hong Seung-hee. Deok-cheol's granddaughter Eun-ho, who has lived her life in line with her father's plan, is back at the starting line to find her dreams and happiness through a meeting with Chae-rok. Hong Seung-hee, who showed fresh visuals and charms in "Memorist" and "King Maker: The Change of Destiny" will portray the youth of her 20s in a realistic way.

The production team of "Like Butterfly" said, "The special cast has been completed to add the experienced beauty of veteran acting legend Park In-hwan and Na Moon-hee and the trendy sensibility of Song Kang Hong Seung-hee", adding, "Please look forward to the miracle of ballet that will turn on the green light between the seventy-year-old at the end of his life and the twenty-three-year-old who have begun their life challenges".

Meanwhile, the new tvN drama "Like Butterfly" will premier in early 2021.

"Park in-hwan, Song Kang, Na Moon-hee, Hong Seung-hee to Star in tvN's "Like Butterfly""
by HanCinema is licensed under a Creative Commons Attribution-Share Alike 3.0 Unported License.
Based on a work from this source