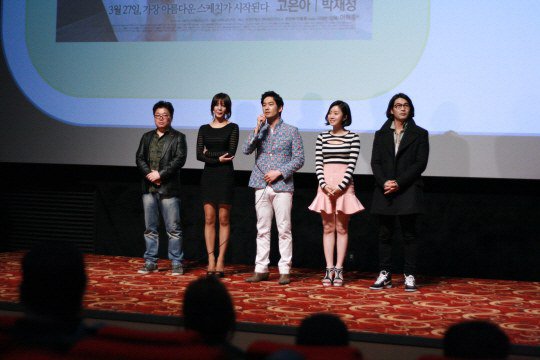 Actor Park Jae-jung is being reviewed for his performance in the movie "Sketch".

While the press conference was held in Lotte Cinema on the 24th in Seoul, praises and compliments fell on Park Jae-jung. He takes on the role of Chang-min, the owner who can read people's minds. He understands and gets closer to wannabe artist Soo-yeon (Ko Eun-ah). The mind-reading concept is all about the eyes and facial expression with not so much talking.

Everyone's attention was on Park Jae-jung and Ko Eun-ah and the director complimented them saying, their acting had improved a lot". Someone else also said, "He's shown potential as a movie actor now".

Meanwhile, Park Jae-jung has starred in the dramas "Sweet Springs", "The Firstborn" and other daily dramas.

"Park Jae-jung is different in movie "Sketch""
by HanCinema is licensed under a Creative Commons Attribution-Share Alike 3.0 Unported License.
Based on a work from this source