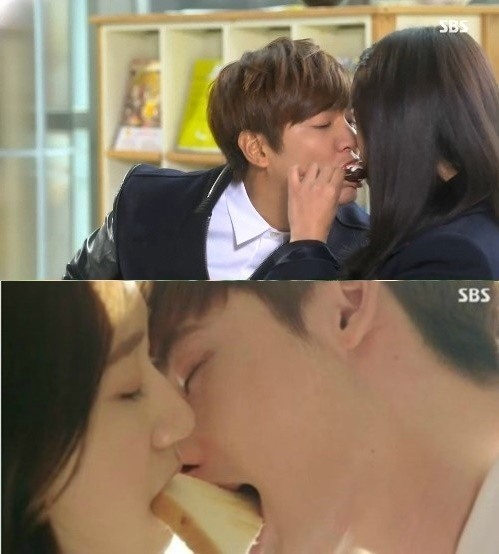 While Lee Jong-suk and Park Shin-hye have denied the romance rumor that broke out recently, their kissing scene from the past is being talked about again.

Park Shin-hye filmed the famous 'bread kiss' scenes each with her co-stars, Lee Min-ho and Lee Jong-suk in her previous dramas.

Park Shin-hye and Lee Min-ho co-starred in SBS drama, "The Heirs", 2013 as the youthful and lovely couple, Cha Eun-sang and Kim Tan respectively. In one of the famous scenes from the drama, Lee Min-ho approached Park Shin-hye, while she was taking a bite of a donut, and then he took a bite of the other side of her donut. The scene shook many female viewers' heart at the time.

Park Shin-hye also played in the sweet kissing scene with her co-star Lee Jong-suk in SBS drama, "Pinocchio", which completed in January this year.

This another famous bread kissing scene of hers actually was part of In-ha's father Dal-pyeong (Shin Jung-geun)'s imagination. In-ha tied a tie for Dal-po and Dal-po took a bite of the bread In-ha was holding in her mouth to free her hands to fix his tie.

"Park Shin-hye's past kissing scenes, donut kiss vs bread kiss"
by HanCinema is licensed under a Creative Commons Attribution-Share Alike 3.0 Unported License.
Based on a work from this source