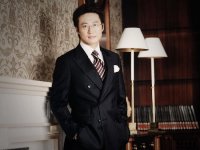 He plays the role of a private moneylender in SBS drama "War of Money", and said "it is interesting since it is a role that I have never played before in a drama".

"I personally have never gone to a private moneylender, but many of the people I know have done so. I thought that it was a very interesting topic, and I have never encountered such a story, so that attracted me to it".
Actor Park Shin-yang, who gained tremendous popularity after the 2004 drama, "Lovers in Paris", have returned to the screen after three years in the SBS drama "War of Money", which will air on Wednesdays, and Thursdays. He played a cool second generation millionaire in "Lovers in Paris", and in "War of Money", he will play a private moneylender who reaches rock bottom after having no money.

At the "War of Money" press release held in the SBS building in Seoul, Park Shin-yang said that he liked the character's name of 'Geum Na Ra' so he decided to take the role.

He explains about "War of Money" in reference to the 2006 Nobel Peace Prize winner, Muhammad Yunus, a Bangladesh bank owner. Yunus ran the Grameen Bank, who lent money to poor women, and received recognition for empowering women's rights.

The role of Geum Na Ra shows an elite who graduated from the Ivy League, but after his father's debts ruin the family, he becomes penniless in a day. While being even homeless, he is determined to make money, so he goes down the path into becoming a private moneylender.

Park Shin-yang is becoming a media interest since he is accompanied by many talented staff members, such as an acting director who helps him with his rehearsals.

"I have been together with my acting director for five years now, and in order to create a character and be captivating on screen, I need to maintain a cold look. Just like how a golfer has a coach by his or her side, my acting director watches over me and checks that my mannerisms are not lacking anything. And I also get advise for when I work in an ensemble with other actors. It is only in our country that does not have acting directors, but in other countries, many actors are known to have them.

He also said that he feels that there is a need for him to adjust his health condition when he is acting. After doing a drama that takes about 3 months, he feels that he needs about a three years' worth of a break. So he explained that in order to get it done right, he needed a rehearsal partner, which he feels is a must.